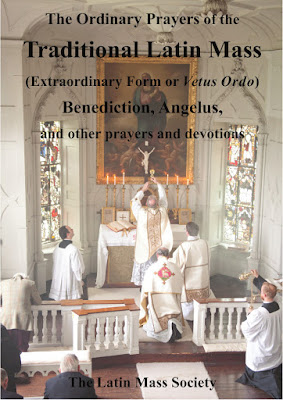 Members of the Latin Mass Society are this weekend receiving their copies of the quarterly magazine, Mass of Ages: with this edition is enclosed a brand new booklet missal or missalette, with Ordinary Prayers of the Mass, Benediction, and other prayers and devotions.

This new book has a clear, accurate, and readable new translation of all the Ordinary of the Mass, taking account of the improved ICEL translation of the Novus Ordo where applicable, but using traditional language ('thee' and 'thou' etc.).

It has new illustrations showing the postures of the priest at different points during the Mass.

It includes variants for High and Pontifical Mass, so the book won't let you down on special occasions: for example, it gives the pontifical blessing at the end of Mass.

It includes the texts for the Angelus and for Benediction, in both Latin and English: if you want to use the lovely chant setting of the Divine Praises in Latin, for example, the text is there.

It includes two Chant Mass Ordinaries, those most commonly used on Sundays - Mass XI, and Mass XVII (for Advent and Lent) - and the four Marian Anthems. 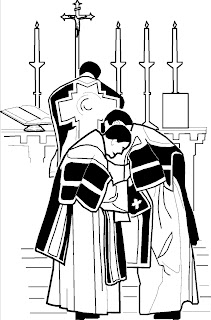 It also has a number of things particularly useful for Catholics attached to the Traditional Mass specific to England and Wales, such as the Prayer for the Queen, the Prayer for England given to us by Pope Leo XIII and commonly said during Benediction, and the 'Long Prayer for England', a charming prayer ordered by Cardinal Wiseman to be said in Benediction on the Second Sunday of the month.

It has the authentic version of the Prayer for Wales in Welsh. Modern books with the Welsh Prayer for Wales use a variety of edited versions, which exclude the petition that the Welsh return to their ancient Catholic Faith. Our version is that used in the Welsh CTS Simple Prayer Book issued in the 1950s.

Such a booklet can't include everything, but we have the modest hope that it will set a new standard for such aids to devotion.

You can buy copies here; talk to the LMS office about bulk discounts.