(Supporters of Home Education may like to support this petition on the latest UK government attack on it.)

A while ago the Catholic Herald journalist Michael Davis thought he'd do a good turn to the Traditional Catholic movement (with which he apparently identifies) by describing us as hateful bigots and antisemites. Now he's decided to do a similar favour to homeschoolers.

It works like this. First, Davis starts the article with a reference to the staggering success of homeschoolers: it seems that they are providing 10% of vocations to the priesthood in the USA, a proportion vastly in excess of their numbers.

Second, Davis lists all the tired old criticisms of homseschooling. Homeschooling is against the teaching of the Church; the children aren't 'socialised'; the parents are 'helicopter parents' who 'seal off their children in a bubble'; even the apparent good of the vocations is undermined by the snarky suggestion that the vocations aren't genuine and the priests won't be good pastors.

Step three is to hold up his hands and say: Oh well, maybe these problems can be avoided by some homseschoolers. Citing one particular group, he says vocations coming from it 'won’t be stereotypically paranoid, socially awkward homeschooled kids': unlike all the other homeschooled children, right?

No doubt he expects us all to congratulate him on what a balanced article he has produced.

The problem is that, just as in the 'oh perhaps not all traditional Catholics are hateful bigots' article, he has reiterated and reinforced an extremely damaging negative stereotype which needs confronting and assessing. Is it true? Because obviously, if the stereotype isn't true, then a balanced assessment wouldn't use it even as one side of the see-saw.

The claim that home education is against the teaching of the Church, perhaps with an exception for 'crisis' circumstances, is obviously insane, since, first, the Church has always taught that parents are the 'primary and principal educators' ('primi et praecipui ...educatores': Gravissimum educationis 3, Vatican II) of their children; and, second, the existence of schools available even to the majority of the population, let alone all of it, is not only historically contingent but historically rare. It is rather more reasonable to say that good Catholic schools, where they exist, can offer educational, social and cultural opportunities homeschoolers will generally find difficult to arrange, and that parents' choice of educational options will take this into account. But that doesn't have quite the same ring to it, does it?

Are children not as well 'socialised' with home education than in standard schools? Is there any actual, you know, evidence out there? Well, here's an article in The Economist, hardly a hippy or traddy publication, which notes:

Nor, on the evidence of Mr Murphy’s book, are they socially backward: most seem confident, assured and well-adjusted. They also have fewer behavioural problems. But one study did find higher attrition rates when they enter the armed forces.

If Davis prefers to keep things at the level of anecdote, I would suggest he spends some time with children from ordinary schools and home-schooled children of equivalent ages. If he has remotely representative children to talk to, he will discover for himself the often-repeated truth that the latter exhibit greater social skills, self-confidence, and intellectual curiosity. In a good many cases, in fact, children are taken out of school and put into a homeschooling routine because the vaunted 'socialisation' of ordinary schools is threatening to do them permanent psychological damage. If Davis has not, in fact, met people who have been badly harmed by the 'socialisation' of standard schools, he needs to get out more.

So, is homeschooling 'the ultimate form of helicopter parenting'? At this point I feel like banging my head on the table. Has he actually talked to any? Home educators don't all have the same educational philosophy, any more than schools do, but it is the nature of homeschooling that teachers can't arrange 24-hr contact time, because the teachers - mostly parents - have other things to do, including other children to teach. This means that children are challenged to work on their own from an early age, and are freer pursue their own interests. Furthermore (and here's a point connected with the question of socialisation), homsechooled children will spend more time in different groups doing things like sports: unlike a parochial school, it won't be the same 30 class-mates in the playground, on the hockey field, and in the chemistry lab. What parents can do, of course, is to establish to their satisfaction that the things their children are doing, and the people they are doing them with, are ok, and intervene if they are not.

Finally, do homeschoolers 'seal their children off' in a 'bubble'? Here's a funny thing. That is what schools are supposed to do. When you send your children off to school, the idea - if there is any idea at all - is that this completely artificial, enormously complicated, and hideously expensive institution constitutes a special environment, contrived after deep thought and long experience, to be uniquely conducive to education and socialisation.

As a matter of fact I don't think schools have ever been very good at socialisation: just read a few school reminiscences, such as the relevant passages of Betchman's Summoned by Bells or Lewis' Surprised by Joy, and the glory days of the English Public School quickly lose their charm. Today, with social-media bullying and the normalisation of playground rape, together with the almost total collapse of educational standards, the majority of schools in the developed world are a uniquely poor environment for both purposes. Like Anthony Esolen, I really wonder if children would be better off running around in the woods on their own. However, that's not the only alternative. Home educating parents set to work to create some kind of educational and socialising environment, and the results show that they they do so with a degree of success, even while leaving their children a lot more time to run around in the woods than children in schools have.

The claim that home educated children who discern vocations make bad priests is, I think, not worthy of a response. It is a disgusting, though apparently thoughtless, slur on hundreds of priests Davis has not met, and to those with the responsibility for forming them. Davis owes them an apology.

Davis does not appear to be interested in thinking seriously about the merits of home education. Perhaps that would be too much effort. Instead he just recycles negative prejudices on the subject while simultaneously admitting that the results don't seem too bad. 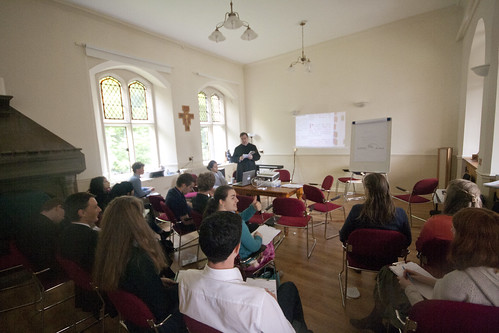