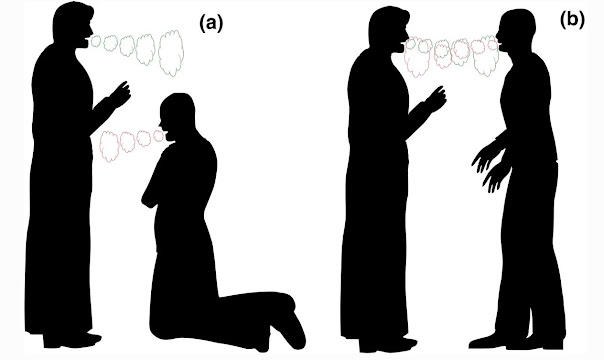 Traditional reverent practice of the Catholic Church incorporates additional elements making it even less risky in the current COVID-19 pandemic. The kneeling position of the faithful while receiving the Host would provide spatial distancing about 50 cm (Fig. 1a): the communicant’s face is located at the level of the chest of the Eucharistic Minister. Provided the communicant stays silent, uses nasal breathing, and the duration of the interaction is short (very few seconds), this would not incur a high risk to the Eucharistic Minister (usually the priest whose safety is prioritized, see above). Furthermore, reduced verbal response of the communicant directs the droplets and aerosol towards the chest of the Minister, which is by far a lower risk than in the face.
In contrast, the typical position of the communicant for Communion in the hand is standing which is the direct, close, face-to-face interaction (Fig. 1b). Any verbal interaction between the Eucharistic Minister and the communicant would direct the droplets and aerosol directly to the Minister’s face and the Holy Bread. Inhaling such aerosol could be risky. The statistical argument (see “” above) points to an increasing probability that in a large group, at least one member is infected, further aggravating the risk to the Minister. If the communicant happens to cough or sneeze, Minister’s face and the Holy Bread become the direct target of both fine and larger ballistic droplets. This is very unlikely in the kneeling position.

Another potentially important factor is that it would be much easier for the Minister to operate fine motorics when the communicant is kneeling than standing. This is due to a much better visual feedback and more convenient hand position when the communicant is kneeling (note that fine manual workers such as watchmakers use tables for routine work rather than stands elevated to the level of their eyes). This would make it easier for the Minister to place the Holy Host optimally and safely on the tongue, avoiding contacts with the mucous membrane and the saliva.

Even though the hands of the Communicant are often assumed to be clean, there is no guarantee. Again, the statistical argument (see above) points to an exponentially growing chance for at least one person with contaminated hands to occur as the group size increases. The typical position of the hands during the prayer—directly in front of the face—makes them susceptible to contamination by exalted and ballistic droplets and aerosol. The assumption that Communion in the hand carries no or little risk is not well grounded and may in fact create a false sense of security potentially provoking more reckless behaviour of both the Minister and the communicant.