Lawrence England at the Newman Society 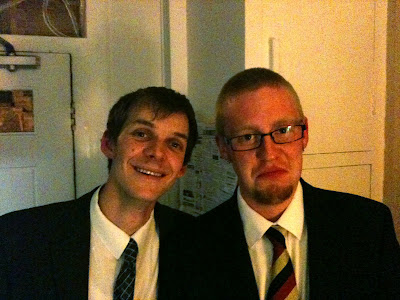 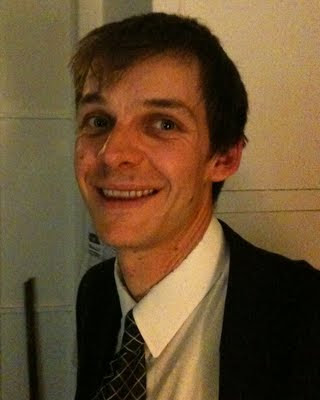 Lawrence England, the chap behind 'That the Bone You have Crushed may Thrill' spoke to the Oxford University Newman Society last week. He spoke about Pope Benedict's 'revolution', the difference the Holy Father is making in the Church. It was followed by a very interesting discussion. It was a fun evening. Here he is with the President of the Newman Society. 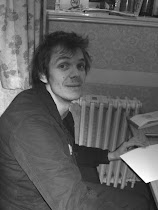 The Newman Society is an extremely venerable Oxford society for Catholic students. We met in the Catholic Chaplaincy, and the Chaplain, Fr Simon Bishop SJ, came along and took part in the discussion.

I promised to post a photo of Lawrence since the world knows him mainly through a black and white photo which makes him look as though he has recently escaped from some kind of institution. Actually he's quite sane and presentable.

This week the great Fr Tim Finigan will be talking to the Newman Society, not for the first time, but alas I won't be around to hear him.

These bloggers aren't just bloggers, of course, but it is interesting that people known through blogs are among the obvious people to invite to give talks to groups like the Newman Society. Not long ago the Newman had a blogger's forum, with Br Lawrence Lew, Fr Zuhlsdorf and Mat Doyle. Before that I attended a memorable evening with Damian Thompson.

Fr John Saward gave a talk to the Newman a few years ago in which he said - not entirely tongue in cheek - 'don't read blogs, read books!' He has a point, of course, and I was delighted he allowed me to put this important message onto the New Liturgical Movement blog so it could be seen by a wider audience...
Posted by Joseph Shaw at 3:13 pm