Sexual abuse of schoolgirls - by schoolboys

I know I'm the only person in the world (ok, a slight exageration) to think that co-education is worth thinking about, but I don't care. This article by Alison Pearson draws attention to the fact that girls find themselves under huge pressure to perform sexual acts on boys in many schools: her example was drawn from a 'highly respected boarding school'. This is hardly surprising, anyone with contacts in such schools, or indeed anyone who reads the newspapers, has heard it all before. It is worse in boarding schools, because the pupils are there all the time, and it is worse today, because online pornography has had its effect on the boys, but the problem is a wider one. Co-education is just a stupid idea.

A friend of mine (at school in the 1980s), one of the earlier cohorts of girls in her particular (independent) school told me of a conversation she'd had with one of the teachers, a rather outspoken and cynical man. He said that before the girls had come to the school the local prostitutes had found it worth their while to hang around outside the gates. They let the girls in and... problem solved.

Are all those girls having a wonderful time exploring their sexuality? That possibility is one the secular world likes to cling to. Given that we are talking about a vulnerable group - children and young adults - this seems to me a tad too close to the self-justification used by paedophiles. We go to endless trouble to protect children from un-CRB checked strangers and then ignore the fact that girls are having sex, below the age at which the law regards them as capable of giving informed consent. Go figure.

In the United States today, an adolescent high school male can find at the desk next to him a young girl equipped by their high school clinic with the latest birth control device ready to provide him with the sexual services that, in an earlier time, he would have received, if at all, from a prostitute. The "soaring pregnancy and abortion statistics on many campuses across the country" that Thomas Sowell has deplored confirm the condition of sexual servitude to which our sexual revolution consigned the best educated segment of our female population. And just as liberated female sexual revolutionaries replaced prostitutes by creating a competing market of free sex, it should not be surprising if they shared the prostitute's dearth of sexual pleasure.

As so often, it is the worldly wise attitude which is naive. Anyone young enough to remember school knows that societies of children have their own rules, into which teachers, parents, and the police can occasionally intrude, but which they do not control. You can't stop children being bullied into a thousand humiliating situations at school. Making one of those situations unwanted sex isn't a very clever idea.

I paste in below something I wrote on this subject in an old post of mine, responding in part to Will Heaven's article lamenting the child-protection problems at a Catholic boarding school, Downside College.

The other thing which struck me was Heaven's jaunty reference to Downside going mixed. He writes:

There is no question about it: Downside School is still flourishing. A few years ago, I wrote in this newspaper about its “second spring”, which occurred after 2005 when it allowed girls to join. I noted that the school was livelier and noisier than before and was at its capacity of 430 pupils.
Alas, Downside – as a community – is now experiencing an unexpectedly harsh winter.
You might think that the sudden onset of colder weather might make Heaven wonder whether 2005 was spring after all. For why did they they let in girls, to a school which had been single-sex since its foundation a century earlier? Did the monks suddenly feel a special charism to look after the emotional needs of adolescent girls? I don't think so. Letting in girls enabled it to bring number back up to capacity: oh, that's it!

I don't blame the monks of Downside in particular, they were just following the trend. The point is that this is a trend in which the interests of pupils were sacrificed to financial considerations, and to educational fashion. No one was ignorant, by 2005, of the educational benefits to girls of being in a all-girls' school; the subject had been studied to death. Catholic boys' schools, usually with superior brand-recognition and resources, continued to undermine the girls' schools by going mixed because it was in their interests, not in the girls'. 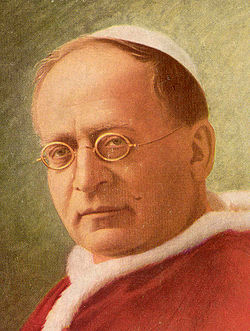 If anyone is interested in the Church's teaching on co-education, they can look at Pius XI on the subject in 1939 (Divine illius magistri):


68. False also and harmful to Christian education is the so-called method of "coeducation." This too, by many of its supporters, is founded upon naturalism and the denial of original sin; but by all, upon a deplorable confusion of ideas that mistakes a leveling promiscuity and equality, for the legitimate association of the sexes.
Posted by Joseph Shaw at 10:00 am