The Traditional Mass and seminaries

Is it appropriate to have celebrations of the Traditional Latin Mass / Extraordinary Form within seminary buildings? On the face of it, this is a very strange question. Why might it not be? Is the Extraordinary Form some kind of contagion which must be quarantined? What, exactly, might the concerns of the authorities be?

Could celebrations of the TLM interfere with the timetable? Only if they were held during lecture-hours and the students were allowed to bunk off to attend. Neither seems necessary. Why not have them at some other time?

Seminarians are supposed to be studying; they study among other things the liturgy, and it is impossible to study the 1970 Missal without some discussion of the motives of the liturgical changes, and of what went before. The Latin Mass Society put up facing-column 1962/1970 Mass Ordinaries (in translation), to illustrate the differences, not only as a service to the general public but following a request from a seminary professor. Differences like the one below, the Offertory Prayers, are expounded and discussed in class. But you can't really get a sense of the Church's ancient Latin liturgical tradition (as the Holy Father calls it) without seeing it celebrated. So wouldn't it have pedagogical value, not only for the TLM to be celebrated in seminaries from time to time, but for the students to be told to attend? 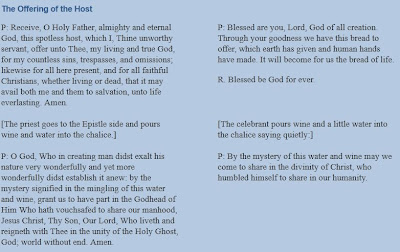 That would also deal with another possible objection, that celebrations of the TLM would be a cause of division, with some students going and others not. Make them all go. They really need to. At worst, they need to know what the fuss is all about. Perhaps they'll decide that it is a lot of obscurantist nonsense and they'll guide their future flocks away from it. Do their superiors trust them to come to the correct conclusion, under the guidance of their professors?

But then again, seminaries are divided in all sorts of ways; not everything seminarians do is compulsory, and what is more they talk to each other and soon realise that the student body includes a spectrum of opinion, that's only healthy indeed. Why should it be a problem if some students develop an attachment for the TLM and others don't? Are they going to start killing each other about it? I don't think so. Wouldn't it be possible for the seminary authorities to foster an attitude of peaceful coexistence? Or even - now what's that phrase? - of 'mutual enrichment'?

Here's a more radical question: why not have training in how to say the Traditional Mass? At least for those who want it. Now we always hear that there isn't time in the seminary timetable. But that doesn't matter, because it can be done outside the timetable, in the seminarians' free time. This is what they do at the North American College in Rome: over three years, the Extraordinary Form is taught in monthly or fortnightly sessions. (They start with learning to serve, then how to be deacon, and then how to celebrate.) It really isn't so very difficult, it doesn't take that many student hours, over three years it can easily be fitted in. I would guess that most seminarians spend more time watching TV than would be needed to learn the TLM.

Are there any precedents for this? Of course. As well as the North American College, which is hardly some marginal institution out in the Styx, there's the diocese of Frejus in France, where not only can seminarians learn the EF but they can be ordained in it, if they wish. And there's the diocese of Masison in the USA, where bishop Morlino actually insists seminarians learn it.

After five years of the motu proprio Summorum Pontificum, you'd think we'd have got beyond this absurd discussion by now. The North American College introduced its scheme to teach the EF in 2008 - right off the bat, after Summorum Pontificum can into effect in September 2007. Since then we've had Unversae Ecclesiae explicitly calling for training to be offered in seminaries, in 2010. When can we expect these documents to percolate through to England?
Posted by Joseph Shaw at 12:27 pm