On Tuesday a debate organised by the Oxford Students for Life was cancelled after what can only be described as a campaign of intimidation by pro-abortion extremists. (Here is Tim Stanley, one of the advertised speakers, on the circumstances.) Oxford Students for Life is a student society within Oxford University, the debate was to take place in a room they had booked in Christ Church, a college of the University, and it was ultimately cancelled because the Christ Church authorities got scared as the prospect of protesters turning up; as they expressed it on Facebook, since taken down:

We thought we should go and say hi! Bring your friends, and if you want take along some non-destructive but oh so disruptive instruments to help demonstrate to the anti-choicers just what we think of their ‘debate’.

Welcome to an elite university in Britain in 2014.


Christ Church, arguably, is in breach of its obligation to provide a space for freedom of expression; I suppose they might say that they could only allow the debate if extra security measures were in place, or something like that, and there was no time to arrange this. This will become clearer if they, and other colleges of the University, refuse to allow the debate to be re-scheduled. But the obligation should be taken seriously. As Neil Addison explains on his blog, it derives from the Education Act 1986 (s43). Institutions of Higher Education are to

ensure that freedom of speech within the law is secured for members, students and employees of the establishment and for visiting speakers

Equally, Mr Addison explains that the protesters may well be breaking the law: there are, thankfully, limits to the horrible things people are allowed to do to each other, under the Harassment Act 1997. Some serious law is sometimes the only way to get people to recover their common sense.

But it really should not be necessary. I say the protesters were 'pro-abortion extremists' not because of their views on abortion, but because of their methods. They wanted to stop a discussion taking place, using - what? - the sound of banging pan lids or the like. (If they had carried this out, it would certainly have been against the Harassment Act.) Their response to reasoned argument, some of it, indeed, from their own side of the substantive issue, is an appeal to brute force. I confess I have more sympathy with the illegal pan-lid banging of the counter-protest against the regular Oxford Pro-Life Witness which was seen off by the Police earlier this year: in this case, one might look at it as one symbolic gesture (prayer outside the entrance to an abortion facility closed for the weekend) is countered by another (banging of pan lids). (That would be too kind, in fact: they were trying to rob us of the legal right to protest.) But in this case no such argument is possible. It was not a symbolic gesture which is being countered by another, but a rational discussion which is being stopped in its tracks. 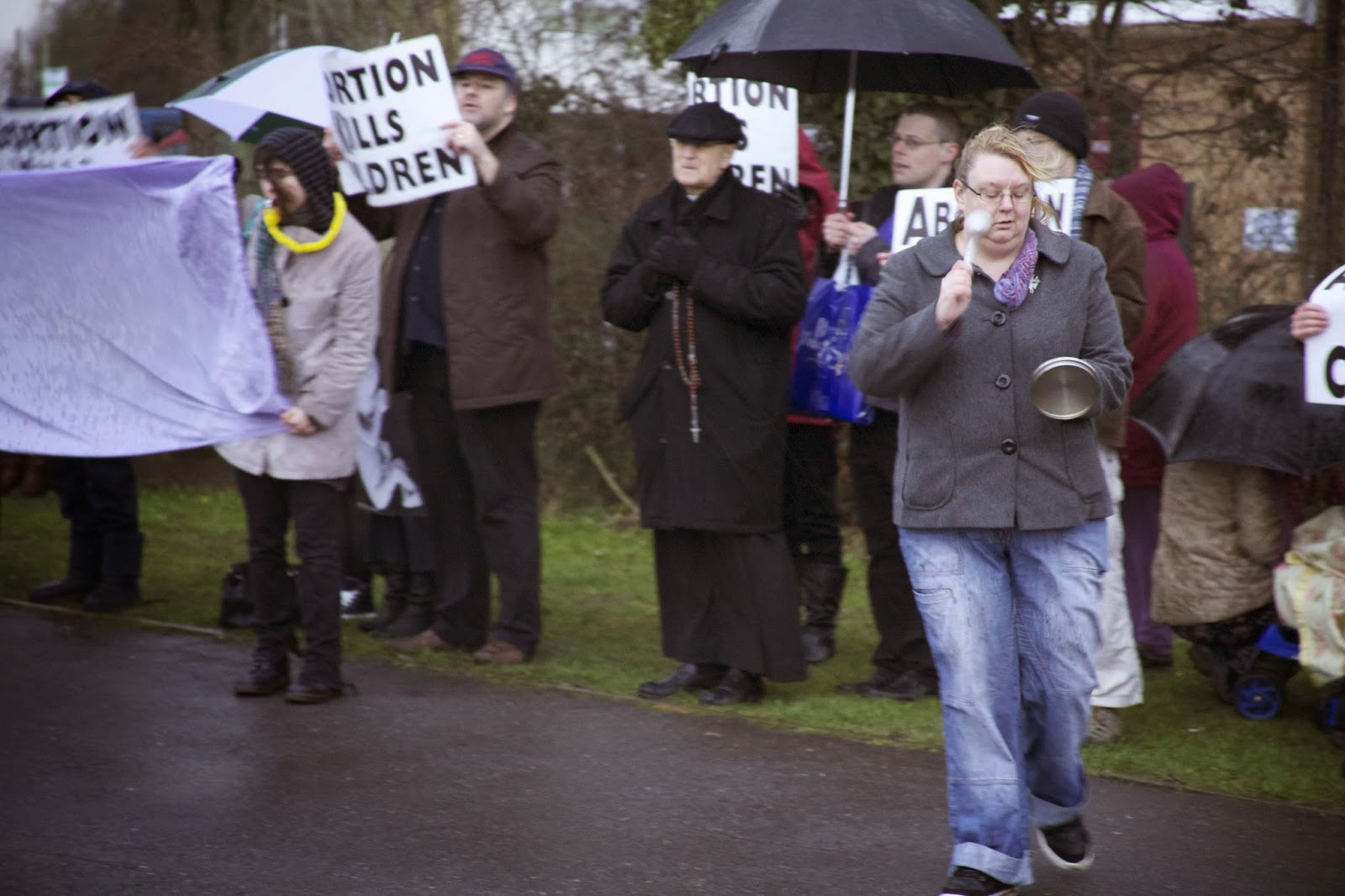 The organiser of the FaceBook group, or one of them, Niamh McIntyre, has written a defence of her actions in the Independent, so let's have a look at these. She seems to have three lines of argument.

1. Nothing to do with abortion should be discussed by men. 'They thought it was appropriate to let men discuss if and when women should be able to make fundamental decisions about their own bodies.' On its own, the argument is simply ludicrous. Should women be forbidden to discuss testicular cancer or beards? And why should some women be allowed to determine what other women should 'do with their bodies'? But McIntrye doesn't believe her purported principle herself: she goes on to point out 'Access to abortion impacts the lives of women, trans and non-binary people every day'. Indeed it does. But not because all of those people have uteruses. McIntyre is really relying on her next argument, number 2, below.


But by the by, why do pro-abortionist keep coming back to the uterus theme? The answer, I think, is merely tactical. In the UK abortion is far more strongly supported by men than women, for reasons which should be obvious: men benefit from it, but don't have to undergo the procedure. Abortion advocates nevertheless want to force pro-life groups always to expose their female activists to their vituperation, abuse, and trolling, which takes as its theme that they are betraying their sisters.


2. Abortion should not be debated at all: 'The idea that in a free society absolutely everything should be open to debate has a detrimental effect on marginalised groups.' Those with most to lose from a free discussion, one might imagine, are those with the most to lose from change: the establishment. However, McIntyre is quite correct that there are exceptions. I would not accept an invitation to debate whether Jews should be massacred, for example, even to argue that they should not be, because this is not a topic which should be open for discussion, and having a formal debate about it legitimises, to some extent, the side in favour. There is a wide grey area here of subjects which may or may not come into this category; to make the category too large obviously stifles discussion too much. For present purposes it is enough to point out that this argument doesn't work on its own: McIntyre needs to show that abortion is this kind of issue. So really she is relying on the next argument, number 3.

3. Abortion is a fundamental right: 'the threat pro-life groups pose to our bodily autonomy is real, not rhetorical.' The argument, brief as it is, is that access to abortion is necessary for autonomy, self-determination. This is a nice argument, Ms McInytyre; your problem is that it is not very widely accepted. Sure, it has a wide circulation in popular thinking about abortion, but as abortion advocates like Ann Furedi frequently point out, it is not established in the law of the land in the UK; nor has it made it into international rights agreements.

This creates a problem, doesn't it? If you think that abortion is a fundamental right which should never be questioned, you will have to argue for this, you will have to have discussions about it; you will have to enter into debates, even in places like legislative bodies and court rooms, where men are not excluded.

Debating whether abortion should be restricted is not, then, like asking whether the fundamental right of Jews not to be killed should be compromised. Abortion, like it or not, is already restricted. Asking whether or not it should be restricted is fundamentally necessary to the programme of pro-abortion campaigners: their answer to the question, of course, is 'no, it should not be restricted', and they think they have some powerful arguments, like the autonomy argument, to make their case. McIntyre's argument in the Independent that it should not be debated is not just wrong, it is self-defeating for her cause.

Support the work of the LMS by becoming an 'Anniversary Supporter'.
Posted by Joseph Shaw at 1:00 pm