A new liturgical gesture - the camera? 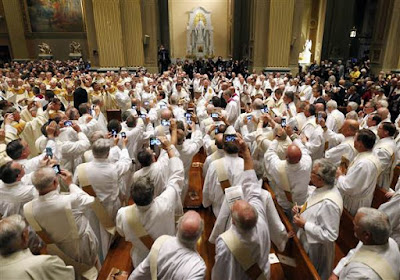 Seeing these images floating around the internet in connection with Papal liturgies in the USA is pretty depressing. It is not as if these priests would not be able to access far better photographs and videos after the event, taken by professionals from specially selected locations. The photos or videos they are taking don't even feature themselves in these cases - the ones that do, of course, are even more depressing. (Fr Stephen Paolino: a name to live forever on Istagram, in infamy.)

What is it we are seeing? I suppose these men live in a society where the social media is ubiquitous, where family events go up instantly onto Facebook and so on. (Where I live, the mobile signal isn't good enough.) Can't they see the difference between a barbecue with cousin Bob and a Mass with the Holy Father?

Clearly, they can't. Their sense of the seriousness of the liturgy has disappeared, if it ever existed. Even when the solemnity of the occasion is increased to the highest possible pitch, with the Pope himself celebrating Mass in a vast cathedral with bishops and all the bells and whistles, it makes no difference. They have, to be fair to them, been trained to treat the liturgy as much as possible as something where the rules of ordinary life still obtain, rather than something special and different. 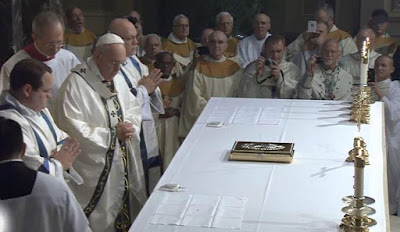 Support the work of the LMS by becoming an 'Anniversary Supporter'.
Posted by Joseph Shaw at 5:40 pm