Is singing in Latin wrong?

This weekend's Catholic Universe draws my attention to a story which appears in The Times of Malta, about a priest who did not allow allow a Latin hymn - Panis angelicus, to be exact - to be sung at a funeral, because it was not in Maltese.

According to the Universe, the priest, Fr Carmelo Tanti, said that is wasn't right for something to be sung which the people wouldn't understand.

The Times of Malta is incredulous, and it appears that Archbishop Scicluna of Malta agrees with them. 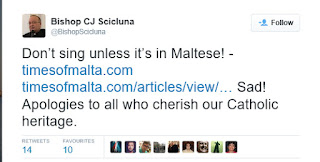 Support the work of the LMS by becoming an 'Anniversary Supporter'.
Posted by Joseph Shaw at 6:14 pm