Montessori and the Directory for Masses with Children 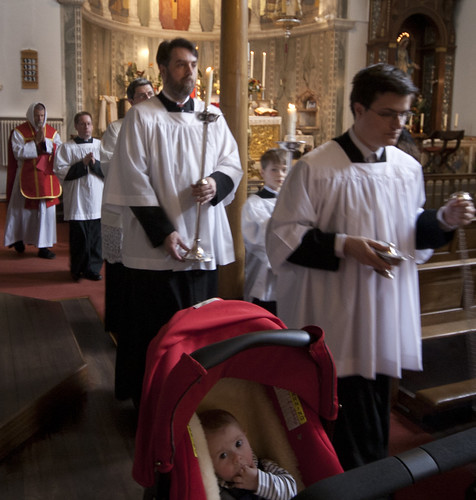 Continuing from the discussion in this post, we may ask the question: What happens if you start out with the idea that children need to be constantly doing or saying things in Mass, and need to understand everything they hear immediately?

You get the nightmare scenario experienced already in the early 20th century, which Maria Montessori describes: over zealous pedagogues influenced by the Liturgical Movement turning the Mass into a classroom. (The Mass Explained to Children p3)

Some lay masters lead files of children into church, rapping out orders to them like a corporal to a squad of new recruits: "Kneel down! No, not like that, all together!" Or one sees a teaching actually taking the children by the shoulders and planing them one by one in the benches, just as if she were packing fruit into baskets.
Another obvious mistake is to teach them during the Mass.
...Even at the Consecration, during those moments of silence and recollection, one hears the voice of the zealous teacher raised...


The problem is, as I noted in the previous post in this series, that Montessori herself contributed to this approach by her emphasis on 'synthetic activity' as the key to learning, in The Child in the Church and other works. When it came to concrete suggestions, she was tremendously enthusiastic about a scheme, put into practice at one of her schools, for children to grow the wheat and vines to be used for the Sacred Species in Mass. Activities in Mass itself would include kneeling and standing up, making the sign of the cross, wandering about with lighted candles and flowers for statues, and carrying up the gifts at the Offertory. Quite how these activities could be appropriately facilitated without the teaching during Mass she abhorred is, sadly, not explained. But the editor of the 1965 edition cheerfully chips in with the possibility of children placing the hosts in the ciborium, and being better able to understand because, as well as the use of the vernacular, 'they see altars more closely approximating real tables.'

Eh? Why is seeing the altar look more like a table going to help children understand what is happening at Mass? Only, I suppose, if the sacrificial nature of the Mass - emphasised by Montessori in The Mass Explained to Children - is ignored. But there is something in common between this strange suggestion and Montessori's own, which is drawn out in the 1973 Directory for Masses with Children, produced by the Congregation for Divine Worship.

...even if children already have some feeling for God and the things of God, they may also experience in proportion to their age and personal development the human values that are present in the Eucharistic Celebration. These values include the community activity, exchange of greetings, capacity to listen and to seek and grant pardon, expression of gratitude, experience of symbolic actions, a meal of friendship, and festive celebration.

Eucharistic catechesis... should develop such human values. Then, depending on their age and their psychological and social situation, children will gradually open their minds to the perception of Christian values and the celebration of the mystery of Christ.

This is it, isn't it? Seeing the Mass first as a 'shared meal' is not just about denying its sacrificial nature. There is another aspect of it, which it shares with the fuss made about growing the wheat for the hosts, putting flowers in front of Our Lady, and, after the reform, shaking hands and the like. They represent 'human values': by which they mean natural, as opposed to supernatural, values: secular, everyday, values.

I have pointed out in relation to the question of the Kiss of Peace that in the liturgical tradition it is the Peace of Christ, radiating out from the Consecrated Host on the Altar, which is passed on by the celebrant in a beautiful way in traditional High Mass, whereas simultaneous handshakes fail completely to convey that reality. This Directory is the first official document I've seen which more or less explicitly regards that as a good thing. The handshake should be seen, first, at a prosaic human level: it should first and foremost indicate natural human greetings and friendship. Only then, much later, after years of seeing the Mass as something principally prosaic and banal, like a Registry Office wedding, a humanist funeral, or a ceremony at a Masonic lodge, then, in some utterly mysterious way, 'children will gradually open their eyes' to what has been in large part deliberately hidden from them, even when they had a 'feeling for God' which has in the meantime been starved: the 'Christian values' involved, the 'mystery of Christ'.

The danger, of course, is that during the years of liturgical humanism children will become bored. This is a danger of which the authors of the Directory are acutely aware, and they have all sorts of suggestions for combating it. (Just for fun I found the Latin phrases in the Acta: it is in the 1974 volume from p30.)

...readers and cantors, whether children or adults, should be employed. In this way a variety of voices will keep the children from becoming bored.(Ita varietate vocum taedium vitabitur.)

Weekday Mass in which children participate can certainly be celebrated with greater effect and less danger of boredom if it does not take place every day (for example, in boarding schools). (minore periculo taedii celebrari potest)

Oh, the tedium! Has any previous document of the Holy See addressed itself to the question of children being bored at Mass, with such persistence? And with such little positive result? 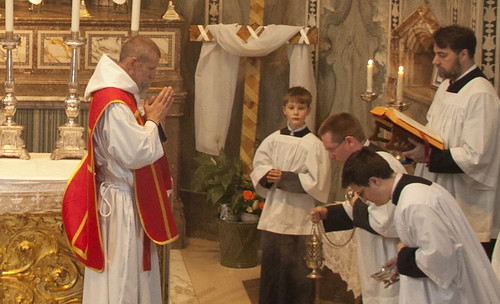 Of course it is going to be boring if the interesting bits are obscured: the profound bits, the bits with deep meaning. I am reminded of another aspect of the thinking of Maria Montessori, something which I must say I find disturbing: her opposition to fairy tales. She regarded fairy tales as dangerous, not because of their pagan origin, the violence, or the possibly immoral actions depicted in them, or anything like that, but simply because they employ the genre of fantasy. Young children, she said, cannot distinguish the real from the imaginary, so fantasy stories are dangerous. The reasoning would seem to apply not only to the brothers Grimm and Tolkien but to Beowulf, the tales of King Arthur, and the lives of the saints in the Golden Legend.

What these stories do, like the stories of the Bible and like the action of the ancient Mass, is to convey profound psychological and spiritual truths through vivid symbols and beauty. This is done not with a view to the listener or viewer being able to articulate in an abstract way the underlying values: the human authors themselves may not have been able to do that. Rather, their purpose and value lie first and foremost in them becoming part of their audience's imaginative world, in such a way that the people listening become able to think with them and live by them.

Children don't have to understand the stories of the Book of Genesis, for example, if by 'understand' we mean 'set out the theological principles implicit in them'. They have given children a grasp of the relationship between God and man for three thousand years not in the way that the Catechism does, but in a frankly more effective way, through their imaginations. The traditional Mass does exactly the same thing, in conveying a vivid grasp of the reality of Christ present and offered to the Father on the Altar.

Don't believe me? Then believe Pope St John Paul II (Dominicae Cenae (1980) 10): focusing just on the use of Latin, he acknowledged that
through its dignified character [it] elicited a profound sense of the Eucharistic Mystery.

What the Directory seems to be saying, like Montessori, is that children are not ready to be presented with these truths in this way. They suggest that, since these truths obviously can't be conveyed to young children by means of complex abstract theological propositions, we should leave them on one side and give the children a diet of 'human values': less interesting truths. But these truths are things they get at home: relationships, table fellowship, human forgiveness and all that kind of thing, and their presentation in the liturgy is a pretty pale imitation of that. Offering these commonplaces, liturgically, over and over again will, just as the Directory acknowledges, engender taedium. And so, with a kind of despair, it suggests not subjecting children to the Mass too frequently.

As I mentioned before, the late Michael Davies wrote that this Directory was the most disgraceful document ever to come out of the Holy See. I can only concur. All the most infuriating liturgical ticks can be found justifications here: children playing musical instruments, constant commentary on the liturgical texts by the priest, dividing children up by age for Mass, the use of songs for the Gloria, sanctus etc. which don't correspond 'exactly' with the liturgical text, the parading of children's artworks, the arbitrary cutting of texts, et cetera ad nauseam.

I so well remember the painful mixture of embarrassment and boredom aroused in my school contemporaries by this kind of liturgy. Few of them, of course, continued to practice the Faith when they left school. At a human level I can hardly blame them, and what was there for them, except the human level?

This stuff has deprived the Church of two generations of young people. It is time to try another tack.

Support the work of the LMS by becoming an 'Anniversary Supporter'.
Posted by Joseph Shaw at 4:18 pm