New Mass of Ages available in parishes this weekend 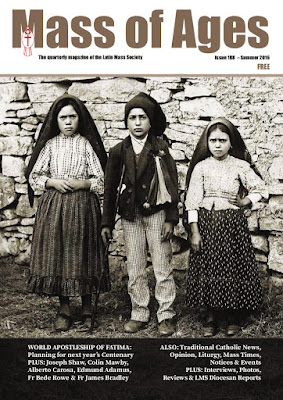 Members should have received their copies by now, and it should be in parishes this weekend. See details and order a one-off copy through the website here.

Some of the contents:


Regular columnist the ‘Lone Veiler’ warns of the dangers of a celebrity civilization
• In an interview with Edmund Adamus, Director of the Department for Marriage and Family Life at the Diocese of Westminster, he outlines his views on the greatest threat facing the family today and what role the family has in the work of salvation. He is asked, “Is the family facing a particular attack by diabolical forces in our own time?” and concludes by saying why Pope Saint John Paul II has been the greatest influence on his life.
• Fr James Bradley, a priest of Personal Ordinariate of Our Lady of Walsingham, looks at the relationship between Divine Worship (the Missal for the personal ordinariates erected under the auspices of the apostolic constitution Anglicanorum coetibus) and the Extraordinary Form?
• LMS Chairman, Dr Joseph Shaw, explains why the recent petition to Rome by the Bishops of England and Wales for the prayer, ‘for the conversion of the Jews’, used in the Extraordinary Form Good Friday service, be replaced by its equivalent in the Ordinary Form is deeply troubling for the international movement in support of our liturgical tradition.
• Clare Bowskill, LMS Publicist, reports on the recent Family Retreat and Gregorian Chant Course. And, in another article, reports how extraordinary numbers attend the Triduum in the Old Rite this year.
• Barbara Kay, a regular worshipper at Christ the King in Bedford reveals how St Margaret Clitherow led her to the Latin Mass.
All our regular features are there, including comment and opinion pieces, book reviews, Lone Veiler, Rome Report, your letters, a prize crossword, reports from our network of Diocesan Representatives, full listings of Traditional Masses across England and Wales, and much more besides.

Read the summer edition of Mass of Ages HERE.

Support the work of the LMS by becoming an 'Anniversary Supporter'.
Posted by Joseph Shaw at 1:53 pm