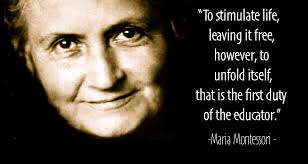 I've been reading The Child in the Church by Maria Montessori 'and others'; it is a collection of different bits of writing from Montessori and some of her followers on religious education.

Some people will be surprised to hear that Montessori was a Catholic. She was, and a very devout one. She had great affection and reverence for the rituals of the Church, and makes reference to such obscure things as the beautiful blessing of bells found in the Roman Ritual. She regarded religious instruction as so important that she wanted - as an ideal - an entirely separate school-room devoted to it, filled with displays and the manipulable aids to learning which characterise her movement, about every aspect of the Church's history, art, and liturgy.

She died in 1952, and her references to the liturgy and the way children could be inducted into it are redolent of the Liturgical Movement of her era. A revealing footnote in the 1965 edition of The Child in the Church which I have explains how the exciting reforms being planned by Vatican II are going to make things much better from a Montessori point of view. It is fascinating to see why the editor imagined that, how people influenced by Montessori took things forward, and also how things went wrong.

I need to take a step back, however, to explain how the Montessori 'method' applies to the liturgy. The leading idea of the Montessori philosophy is that children should be allowed to learn things in their own time and in a way appropriate to their age. Instead of waiting till the child is seven and then teaching the child in the propositional way of the classical catechisms, which they can begin to grasp only at that age, Montessori points out that much younger children can learn, but in a non-intellectual manner. This is, of course, obvious: they learn to walk and talk, use a knife and fork, and all kinds of things, with great rapidity and tenacity, and, as she points out, without the 'fatigue' of the school room.

Montessori wants to make place children in the conditions best suited to their spontaneous early learning, so it can be as effective as possible. Indeed, failing to do this she likens to failing to give children the food, clothing, and fresh air necessary to their physical development. She saw children playing with bricks and absorbed by illustrated books, so she and her followers surround small children with educational bits and bobs to manipulate and look at. Visitors to Montessori-influenced home-schoolers can find it difficult to find a place to sit down, or space on a table to put a mug of tea, not occupied by cunningly-conceived objects designed to illustrate mathematical relationships or stimulate the imagination.

I should emphasise that I've nothing against this stuff, and indeed the inflence of this kind of thinking is so pervasive that no house in the developed world with a small child is entirely free of it. My only qualification would be that, in my personal experience, its effectiveness is not exactly magical, and children differ in their preferred learning methods more than Montessori seems to have realised. But that's not to my present purpose.

Motessori's point is that children should be assisted in learning. The process is (to use modern terms) 'child led', but it is not that the children are left to fend for themselves, and it is far from being the case that Montessori had no substantive educational goals. It might shock her secular modern followers to read her saying (p54):

It is our duty as parents and teachers to pass on to the next generation the "Deposit of Faith" which has been handed down through the centuries by the Church. Our problem therefore is not so much a questions of what to teach but of how and when.

But say it she did. The 'child led' stuff is simply a technique for getting the target information into the childish mind as effectively as possible.

The progressives will be more reassured to read her saying that adults can be obstacles to learning, and over-zealous and misguided teachers are worse than useless. Indeed, her 'golden maxim' is: "Every usesless aid arrests development". The reason is that the cack-handed adult can get in the way of the child's fruiful personal engagement with something.

Here's another Montessor quotation, from a different book (The Child, Society and the World: Unpublished Speeches and Writings, p16):

The fundamental help in development, especially with little children of three years of age, is not to interfere. Interference stops activity and stops concentration.

This is all slightly scary as it suggests that each parent and teacher has to navigate a narrow channel between the Scylla of innapriate interference and the Charybdis of neglect. Getting it right, especially when one realises that different approaches work better with different children, is a matter of sensitivity and judgement. Like many charismatic founders of movements which fail to live up to their early promise, I suspect Montessori herself had an acuteness of judgement which could not in any simple way be passed on to her followers.

This Scylla and Charybdis problem takes on a particularly acute form in the liturgy. Montessori notes that children are fascinated by things like liturgical colours, and the statues and art in traditionally-decorated churches. Again, she tells us that they can take a very keen and exacting interest in ritual. The Scylla of innapropriate guidance would have us navigate in the direction of leaving children alone in this environment: answering their questions, of course, but certainly not interuppting their prayers. On the contrary, however, Montessori seems worried only by the Charybdis of neglect. Taking her successful experiements with allowing small children to manipulate things, she makes an astonishing assertion - particularly astonishing, when applied to the the liturgy (p59):

Everyone knows that, unless children are asleep or inhibited, they are always in motion. What is there special about the kind of activity which accompanies the operation of the absorbant mind? ... it must be a form of what we call "synthetic activity", that is movement which brings into full co-operation the two main elements of the child's personality--mind and body--the intelligent, directing will on the one hand, and the co-operation of the voluntary muscular system on the other.

... such actions as making the Sign of the Cross, with or without holy water, genuflecting, kneeling down and standing up during a service, carrying lighted candles without spilling grease, placing flowers at the foot of a statue and so on.

The possibilities for this in the traditional Mass are fairly limited, but they were being expanded at the time she was writing, and among her examples is the experimental practice of laity bringing up the gifts at the Offertory. It is surely not a coincidence that the reformed Mass held all sorts of additional opportunities for 'synthetic activity'.

The introduction of rehearsed 'synthetic activities' into the Mass is particularly surprising given Montessori's emphasis in another work, her The Mass Explained to Children, that children must not be instructed during Mass (p3), as happened in her experience.

Even at the Consecration, during those moments of silence and recollection, one hears the voice of the zealous teacher raised--more often than not an unmusical and expressionless voice--droning out explanations, as though fulfilling a dry duty. The lesson over, a sharp "Sit up!" shoots all those young bodies upright again, and in those children--with the best intentions in the world--every spiritual impulse is thus stifled.

The first edition of The Child in the Church was published in 1929; The Mass Explained to Children appeared in 1933; these two positions must be taken together, in tension, as part of the Montessori outlook. It was the stress on 'synthetic activity' which went on to be influential in the movement to establish special 'children's liturgies' and efforts to stop Mass being 'boring' which followed the Second Vatican Council.

Montessori has much to say about how we should let children wander about on their own and look at flowers and get out the educational toys of their choosing. Perhaps this 'free range' learning is even a bit over the top. It is doubly surprising, then, that we find in this essay in The Child in the Church an extension to the liturgy of her observations about children running their fingers over geometrical study aids, and the like, as if children had no capacity for silent and still contemplation. The reality is that young children can stand or sit transfixed with fascination looking at a sheep in a field, at a workman putting up shelves, or at a beautiful painting, long after the adults would have preferred to carry on with the walk, gone for a cup of tea, or moved on to the next room in the art gallery.

In my next post I will say something about the chickens which came home to roost from these ideas, in the form of the 1973 Directory for Masses with Children from the Congregation of Divine Worship, signed by Cardinal Villot and Annibale Bugnini.

Just to whet your appetite, Michael Davies remarked of this document that it was the most disgraceful ever to emerge from a Sacred Congregation.