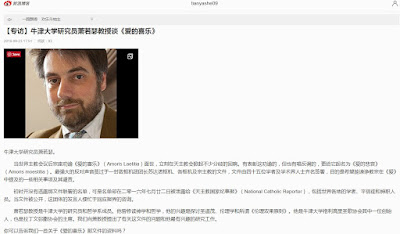 Over the Summer I gave an interview to a Macau-based publication; the interviewer was an Italian journalist, Antonio Porfili. You can see it here.

This has now appeared on a Chinese website, in Chinese - above is a screen shot. One fun thing is that I have been given a Chinese name - a version of my name which can be written in Mandarin. I can't read a word of Chinese, but I'm told it works like this:


蕭 (Hsiao) is a reasonably common Chinese surname that sounds similar to Shaw.

若瑟 (Rwo-seh) is the traditional Catholic translation of Joseph, and literally means "as harmony".

I do know that the convention in China is to put the surname first. So if I ever travel East, I shall introduce myself as 蕭若瑟.

At least I would, if I could say it without embarrassing myself!

At any rate, the spread of this humble interview is a nice demonstration of the univerality of the Church, and the interest the Traditional Mass, and doctrinal orthodoxy, has in China. Read my post on the Position Paper on the Extraordinary Form and China here.