The joys of polarisation


It is interesting to see EWTN giving Cardinal Burke the interview I posted yesterday, and the general pro-dubia stance they have taken. A similar editorial line is being taken by Church Militant. Less surprising is the support for the dubia coming from LifeSiteNews, which has long had a robust editorial line.

From a Traditional Catholic point of view, each of these organisations has come in for criticism over the years. Christopher Ferrara wrote a book, EWTN: A Network Gone Wrong with some stinging criticisms of their TV broadcasts, which showed a marked tendency to tone down their attachment to the Church's traditional teaching and spirituality after the retirement of Mother Angelica. I myself criticised Michael Voris's absurd and inconsistent vow never to criticise the Holy Father; in fact his 'Vortex' videos have continued studiously to avoid the subject of the dubia, which has been covered for them, as far as I can see, by Christine Niles. Even LifeSiteNews failed, in the end, to back up Hillary White when she was attacked some time ago by Ultramontanist fanatics for reporting something about the Pope which they simply wished hadn't happened.

Reporting on the dubia in an even-handed way, giving the dubia the oxygen of publicity, is precisely what the Pope's self-described supporters do not want, and doing so pushes these organisations away, or further away, from the institution mainstream of the Church. That means things like the degree to which bishops' press people would return their calls or help them arrange interviews, the degree to which people in the Curia in Rome would regard them as a respectable Catholic news service, and things like that.

The same process can be seen with what we might call the intellectual heavyweight conservative Catholic blogs and journals, such as Crisis, Catholic Culture, and First Things. These have never been 'traddie', on matters liturgical and spiritual, and often writers on these platforms have gone to a lot of trouble to give Pope Francis the benefit of the doubt, to promote his initiatives, explain his ideas and so on (as, in fact, have I on this blog). But with the crisis over the dubia they have been carrying some very hard-hitting stuff in support of the Cardinals.

As with the news services, there is a price to be paid for not taking the party line on something as contentious and important as this. There are many Catholic institutions, for example, which would allow their members to have associations with some kinds of Catholic publication, but not others, and the quickest way to become persona non grata in lots of places where lots of resources are controlled is to allow oneself to seem to be not 'with the Pope', when the pope was going in a liberal direction. So the writers on these platforms may end up losing certain opportunities, and the editors may for the same reason find it harder to recruit writers.

But we can see individual Catholic figures, with their own personal careers and reputations and influence to consider, coming out in support of the Cardinals, in the various joint letters, and notably with Professors Finnis and Grisez. These two of course don't need to worry about getting promotion, but they are still taking a risk with the considerable influence they have had over the years with Bishops' Conferences and over younger scholars, if they cease to appear to be balanced, mainstream, people who basically 'support the Pope'.

So, first, on a personal note I would like to express my admiration and gratitude for and to the people involved in all of these ways, nearly all of whom have more to lose than I have in speaking out. What they are doing is their duty: and I should emphasise that this is so even if they (and I) are mistaken. Perhaps there is a perfectly sensible explanation of the meaning of Amoris laetitia in combination with other statements and hints. We are still right to ask what that explanation is.

The wider point is that the move of Catholic intellectuals in support of the dubia is so marked that Austen Ivereigh was obliged to acknowledge it, suggesting that the reason all these academics and writers were supporting the dubia is that they are too intellectual, attached to reason, and not sufficiently pastoral: indeed, he tells us that Amoris can only be understood by Pastors. A weak argument, of course, as many supporters of the dubia are indeed pastors (unlike the Holy Father, Cardinal Burke has been a Parish Priest), but a very significant admission. What happened to the Church's liberal intellectual leadership?

Modernism at the turn of the 19/20th centuries, and neo-modernism from the 1950s to the 1970s, was not led by pastors, or indeed by a popular upswell from below. It was led by theologians. It is amusing to read so many arguments about liberal 'pastoral' strategies on contraception, and about 'pastoral' liturgy, being made, in the mid 20th century, by the high-brow denizens of universities and monasteries respectively.

That school of thought has gone now, leaving only vestigial traces, particularly in the English-speaking world. They lost the argument in the end, and fashions changed. A few of them labour on in great old age; a few others have adopted liberal positions as the path of least resistance, but neither are capable of producing new and interesting ideas. And now push has come to shove, the conservative Catholic intellectuals of the Pope John Paul II generation have been forced into open opposition to what is presented as a Papal initiative.

This is clearly not what was supposed to happen. I can only imagine that the architects of 'liberal Amoris' (for want of a better term) imagined that the instinctive loyalty to the Pope of Catholic conservatives would triumph over their attachment to a sane view of marriage and sexual morality, but the opposite has happened. It is the conservatives who've stuck with the view of Cardinal Kaspar on the basis of various Papal hints who look isolated and weak, and not very 'conservative' after all, and it is the intellectually weakest of them who have taken this line, people like Mark Shea and Rebecca Hamilton (who?) on Patheos, while a number of others have lapsed into embarrassed silence. (Jimmy Akin? Fr Longenecker? Are you there?)

This is a very interesting situation. What it means is that a very large proportion of our conservative Catholic voices have been forced to reconsider the narrative, which has been a favourite of their school of thought, that everything which has gone wrong has gone wrong because of people misunderstanding or mis-implementing Vatican II or the post-Conciliar popes. When a pope has made it clear that his personal view is something nor really consistent with the Tradition--Paul VI on the liturgy, John Paul II on the death penalty or the authority of the husband over the family--they have tended to side with the Pope against Tradition, despite the fact that the Papal statements on the subject tended to lack magisterial weight. 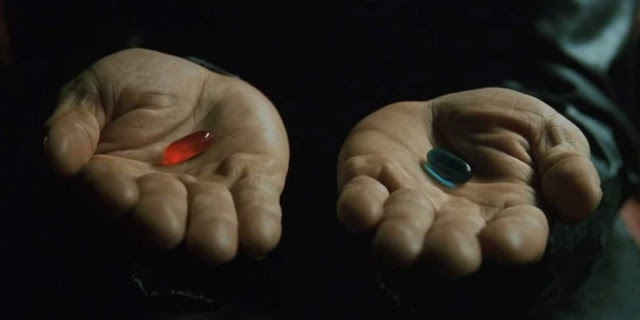 From now on, that strategy isn't going to be attractive to these conservatives. They've been asked to do it once too often, they have refused to do it, and things are not going to be the same again. What happens to ultra-montanist Catholic conservatives who finally realise that some at least of the Church's problems go right to the top--who take, as the metaphor of the hour has it, the red pill?

Ask a Traditionalist. Almost all us have gone through this process personally: I certainly have. Once the dust has settled, and people think through the implications of what they have realised, we will be entering a new phase of the history of the post-Conciliar Church. I don't think the liberals will enjoy it.

Support the work of the LMS by becoming an 'Anniversary Supporter'.
Posted by Joseph Shaw at 12:09 pm