Children and the Traditional Mass 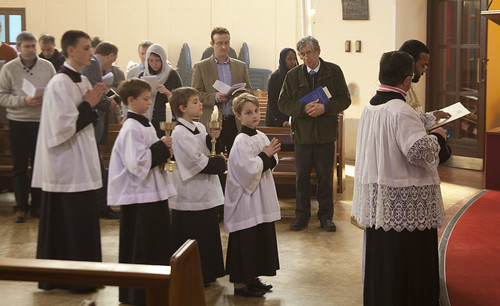 In the pause between Christmas and the New Year, on the feast of the Holy Innocents, I invite a little reflection on children and the liturgy.

I have written a few posts about this already on this blog, and the current issue of the Catholic Herald has a short piece by me on this topic. But today I am publishing a Position Paper about it on Rorate Caeli go there to read it.

People who have never attended the Traditional Mass can still be found who assume that the only people there are old folks who can remember it from the 1950s. The image of young people--perhaps 'rigid' young people--associated with it has, however, begun to impinge on the consciousness of the wider world, and the mental readjustment this has necessitated has been painful to watch. The Holy Father has repeatedly said that he finds it difficult to understand, and he is certainly not alone. Another step again is required to absord the fact that in many places the Traditional Mass is filled with children, who seem perfectly contented with it, in fact rather less bored than children at the Ordinary Form can often be, despite the attempts being made to entertain them.

If you find this difficult to understand, you may need to let go of some prejudices before it begins to make sense, and it is for the sake of my more baffled readers, or the baffled people my readers meet, that I have been banging on about this subject. What I want to convey to them can be summarised in a few common-sense ideas.

1. Modern entertainment, education, and liturgy directed at children tries to keep their attention by frequent change, by keeping things familiar and easy to digest, and by a mockery of the old order: gender models, hierachy, traditional narrative structures, doctrines and so on. The last element is part of a 'dumbing down' process but often comes across as baffling to children, who don't have an articulated grasp of what is being rejected, so can't see how clever or funny their entertainers, teachers, and children's-liturgy-coordinators think they are being. The overall effect is one of banality, which is exremely boring, especially for children who are (mentally) six months older than the intended audience, for whom it comes across as acutely patronising.

2. Traditional entertainment, education, and liturgy for children (as for anyone) invites you into something which you do not already understand. If that thing is of real value, then this invitation is intriguing, and the things you see and hear seem to be, what they are: filled with profound, though not immediately clear, meaning. This is fascinating for children: you can see them absorbed by it. They don't understand everything straight away, but children's whole lives are like that, and they have a way of engaging with things at their own level. Repeated experiences of the same thing, or type of thing, enable them to penetrate to greater and greater depths.

The Traditional Mass is an example of the second type of thing. And you know what? It works. It doesn't make children morally and spiritually perfect right away--of course not--but as they grow older and more familiar they can become absorbed by it for stretches of time as they are with stories and plays and traditional games. Being absorbed by the liturgy is what we all want, isn't it? Because the liturgy is the source and summit of the Christian life: so says Vatican II.

But oh no! the liberals say: even if children are absorbed by the vestments and the incense and the music they don't really understand it, as they would a Novus Ordo celebration done specially for children in words of one syllable, and surely it is understanding which is the important thing. After all, liturgy is not about entertainment, is it?

This objection rests on a couple of mistakes. The first is the idea that children, particularly small children, understand the baby-talk of the Eucharistic Prayers for children. I'm afraid children simply aren't going to take in such big blocks of texts; no educationalist would imagine that this is a way to get children to understand anything. Catechesis may enable them to grasp what is going on, but that is going to be true regardless of the liturgy. Our question is what the liturgy can itself contribute.

The other mistake is in imagining that a child's engagement with the ancient liturgy should not be described as 'understanding'. What children can understand in the Traditional Mass is that there is something of tremendous holiness and grandeur taking place; this is something children at a liberal ideal liturgy would be forgiven for missing completely. And if you don't understand that, then you really have missed the whole point.

The liturgical reform was focused on verbal communication, and it is natural for its supporters to look at verbal comprehension to measure its success. But a child who can parrot back to his teachers that at Mass 'we remember that Jesus had a meal with his friends' has not, simply by that fact, understood the Mass. A child who has a developed an instinct to kneel and be quiet, because what is happening up there in the sanctuary is beautiful and set apart from ordinary life, has, on the other hand, grasped something fundamental, and is in an infinitely more receptive frame of mind to benefit spiritually from the experience, and to absorb appropriate catechesis, than a child who can do no more than trot out a simplistic verbal formula.

It is interesting to see that a traditional conception of children's Catholic education is not, after all, limited to learning the Penny Catechism by rote. Such learning makes sense, in fact, in the context of the training of the emotions, the mind, the spirit, by the liturgy. The Penny Catechism can attach pithy verbal labels to experiences which are, in fact, incommunicable. The labels are helpful, indeed indispensible, but they certainly aren't the whole story.

'Suffer the little children to come to Me', says Our Lord. And when they come to Him, what does He do? Does He tell them simple stories about kindness to animals and tolerance to people of other faiths? No. Does He give them a lecture, in words of one syllable, about theology? No. He embraces them and blesses them (Mark 10:16). In other words, He shows them natural affection, and He subjects them to an objectively efficacious ritual. Parents and Pastors have something to learn from this. 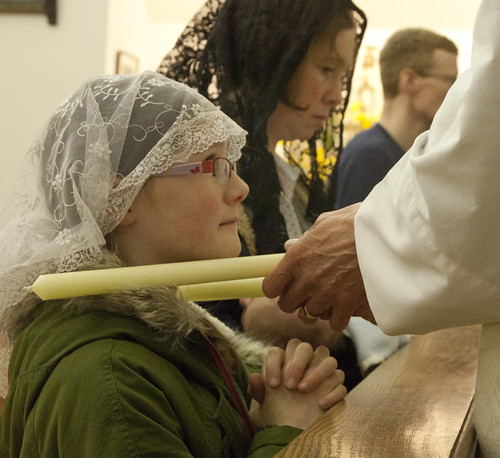