I've just had this photograph of Fr John Berg, Superior General of the Fraternity of St Peter, with the Holy Father, which took place recently. An interview like this is not an everyday occurance! 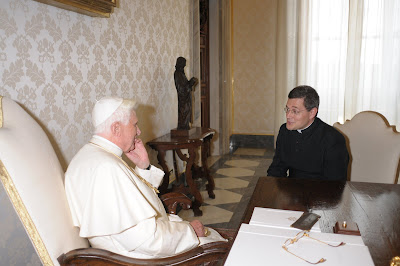 Here's a press releas:
On July 6th the Holy Father received the Superior General of the Priestly Fraternity of St. Peter, Very Rev Fr. John Berg, in his library at the Apostolic Palace. Fr. Berg had the opportunity to speak privately with the Holy Father during about 15 minutes and to thank him for all that he has done for the FSSP and for the Church. After hearing about the work being done at the seminaries and apostolates (in 115 dioceses worldwide) of the Fraternity of St. Peter, Benedict XVI encouraged its members "to remain ever faithful". Following this meeting the Holy Father greeted Fr. Bisig and the other founders of the Fraternity of St. Peter who had come for the occasion and imparted his blessing upon them and all of the members of 350 members of the FSSP. No doubt the 2,600 members of the Confraternity of St Peter will have been included in this blessing, and generally all those - whether laity or clergy - who generously support the FSSP's ministry. The meeting took place on the 21st anniversary date of the audience of the Founders with John Paul II at the Apostolic Palace. A gesture of encouragement to the FSSP - the largest EF priestly community in full communion with the Catholic Church - this audience also demonstrates the personal interest which the Holy Father takes in the matters linked with the Roman traditions of the Church and with the fruitful implementation of the Motu Proprio Summorum Pontificum.