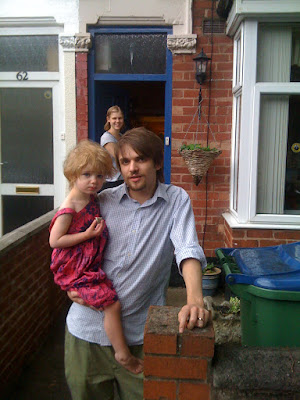 Yesterday I visited Birmingham with my family, where we were given lunch by Matthew Doyle, the Birmingham Representative of the Latin Mass Society, and his family. After lunch Matthew and I had a little tour of John Henry Newman's room, and other places of interest in the Birmingham Oratory, where we were the guests of Fr Philip Cleevely.

I know the London and Oxford Oratories well, but this was my first visit to the Birmingham Oratory. In light of Newman's forthcoming beatification it was a particular privilege to see Newman's room, where he worked and slept, until he was a cardinal; at that point he was given a separate bedroom, and part of his old room became his private oratory, and the rest remained his study. It is to a remarkable extent exactly as he left it. Among the fascinating personal items of Newman which can be seen there is his 'soup-plate' hat, red for a Cardinal and with gold braid on it (properly a Capello Romano, or Saturno). Newman had a great devotion to St Francis de Sales, and one wall of the little chapel is decorated with etchings depicting his life. There is also a painting of St Francis over the altar. Here is St Francis giving a Rule to St Jane Frances de Chantal, with whom he founded the Order of the Visitation. There is also a highly practical and space-saving vestment press. Fr Philip also showed us the library and the refectory, both of which are as Newman knew them. While the church was rebuilt (as a memorial to him, in fact) after he died, the Oratory House is essentially unchanged. Newman used the desk on the right, below, to write the Apologia (although it wasn't at that time in the library). There are some more photographs in my Flickr set here. Readers may remember my post about a book inscribed by Newman, which is here.
Posted by Joseph Shaw at 11:17 am