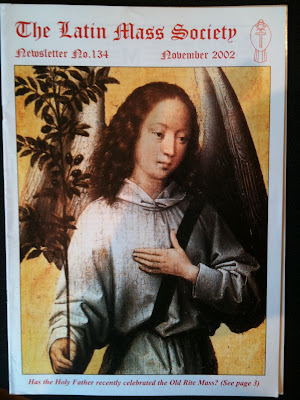 John Medlin, stading behind the chap in the cassock.

The other day I attended a quiet dinner in London to conclude John Medlin's last day at work for the Latin Mass Society. It was a very pleasant evening. John is planning a move to Penzance. Despite the distance I don't think we've heard the last of him!

John was taken on to edit the Latin Mass Society's magazine; his first issue came out in May 2003, with a daringly modern font and a change of name: no longer the 'LMS Newsletter, but a a magazine in the proper sense, 'Mass of Ages'. His last edition is the current one, August 2011: with four a year, he's produced forty five issues over 11 years. He expanded the use of colour, introduced paid-for adverts, and improved both the format and the content of the magazine.

For most of the time of his employment by the LMS he combined Editing the magazine with being 'General Manager'. Neither post existed, at least as a paid position, before he took them on. 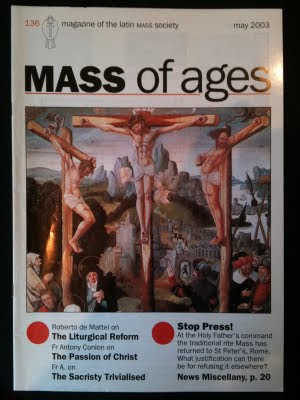 This really established the LMS as an organisation on a level with many medium-sized charities, able to organise major events and engage with the wider world through a magazine available to non-members through bookshops and other outlets, such as the St Paul's Bookshop and the CTS bookshop in Westminster.

It is always telling when one member of staff has to be replaced with two: John's workload was enormous and the range of skills needed extremely wide. We are very happy to have had our new General Manager, Mike Lord, well established before John left the office; the new editor, Gregory Murphy, will be producing the next issue of Mass of Ages, to come out in early November.

Many thanks to John Medlin, the Latin Mass Society's first professional magazine editor and General Manager. We all wish him a very happy and active retirement!