Many people following my recent series of posts - probably not the sort of people who read this blog very much, so this is perhaps a theoretical claim - would say that the pursuit of excellence, in liturgical art, architecture, in the intellectual sphere, and in everything else that pertains to Catholic life is elitist, and therefore bad. Many such people would add, when it was pointed out that the Church has historically always promoted such excellence, that this was still bad, and all done away with by Vatican II.

Well Vatican II did no such thing, of course, and the immemorial tradition of the Church still has something to teach us. As I have said before, however, the central motivation of the advocates of mediocrity, in my view, is to make available to a larger percentage of the typical congregation the opportunity to make a contribution to the the parish in the fields of music, art, liturgy, catechesis, and anything else which might be up for grabs. If these things are run by properly qualified people exercising strict quality control, they will exclude a good number of people from being directly involved. So take away the quality control, sack the qualified overseers, and get as many people signed up as possible. To repeat, this attitude arises from two things: a failure to value the spiritual participation of an ordinary parishioner worshiping in his pew, and the collapse, in most parishes, of the sodalities and guilds engaged in spiritual and especially practical charitable work in which everyone can, if they wish, find a valued place. In regard to the first point, this is, then, a reflection of a misguided attitude to the liturgy.

So that's where the attitude comes from; this post is about an aspect of its consequences which I have not yet discussed. The goal is to bring as many people as possible into 'parish ministries' without regard to their training or talent. The various tasks exist not because of the importance of the product (the music, the liturgy, the RCIA class) but because of the importance of the office holder. The person having responsibility for the music ceases to be an artisan, who would expected to be booted out if the standard slipped. He becomes instead a primadonna, whose office is an attempt to give him a feeling of being valued.

If that is the point of having parish ministries, then the distinction between those who are 'involved in the parish' and those who are not ceases to be an accident of vocation, training, and talent, but becomes a matter of status. The people 'involved in the parish' are the important people, the valued people, the people who are really participating: for that is the point of the parish ministries, to enable greater 'participation'. The reality, that it is the holiest members of the congregation are the ones who are participating most intensely in the parish's spiritual life, and that you will never know who they are, is forgotten. It is replaced by a very visible distinction between an elite group, separated from the majority of the congregation, since you can never get the majority of a parish into the choir or parish liturgy committee, however extravagantly they have grown. (The creation of herds of lay readers and EMHCs is clearly an attempt to overcome this problem, but a large number of Catholics are not sufficiently regular at a given Mass at a given church to be included in the mind-bogglingly expansive rotas which are produced.) This elite is itself hierarchically organised, into leaders, committee chairmen, coordinators and so on, a hierarchy which is perceived to be a hierarchy, not of skill, but of esteem.

This is the elitism of mediocrity.

The charge of elitism, in a negative sense, made against parishes where efforts are made to foster excellence is based, I think, on a confusion. It is assumed that in a parish aiming at excellence people performing important tasks, like singing and serving, there is the same elitist attitude as in a parish aiming at mediocrity, the only difference being that in the former the number of 'involved' people is probably smaller and it is acceptable to tell people that they are not up to scratch for a given task. But where it is crystal clear that people are only in a choir because they can pitch a note, then you are more, not less, likely to understand that they are not regarded as a better than everyone else in any other way. It is not because they are more zealous, because they are regarded as 'good people', or because it has become an unwritten rule not to offend them: no, it is because they can pitch a note. No one can object to an elite of singers who are simply the people in the parish who can sing: what is problematic is an arbitrarily selected elite who are regarded as superior to everyone else, despite the fact that in many cases they can't sing. With parish ministries, it is when you remove the connection with skills, and make it a matter of 'participation', that you create a situation of elitism in the negative sense.

This is very evident in much parish life today. In many parishes the system has collapsed, or the number of active parishioners is so small that the 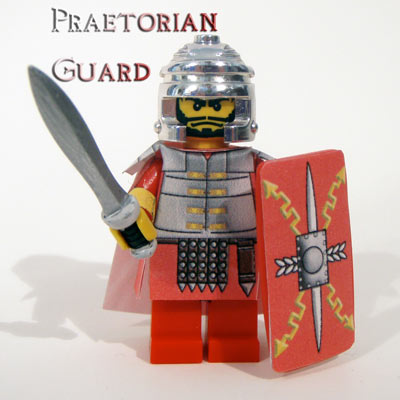 issue does not arise. But in large, active and successful parishes which have a policy of mediocrity, you can see it in technicolor. The priest is surrounded by a sort of Praetorian Guard of assistants, who occupy positions designed solely to flatter the occupants into thinking they are making a contribution, regardless of the value of that contribution. This Praetorian Guard often has a very special privilege, which is access to the Parish Priest, a privilege denied to others. If any ordinary member of the congregation were to say something to the Parish Priest about any aspect of parish life he will be told not to bother the PP but address his concerns to the head of the relevant branch of the parish bureaucracy. Only those office-holders are allowed to discuss things with the PP - the poor man, of course, being cut off from the views of the ordinary pew-sitters, but surrounded by a group of people whose only qualification for their jobs is a pair of sharp elbows.

Once, when I was an undergraduate, I attended a Mass in the Oxford Chaplaincy where the organ was played continuously through the consecration. I didn't know much about liturgy in those days, but it struck me as very odd, and I asked the celebrant about it. He referred me to the head Chaplain. The head Chaplain eventually responded by saying that the music was organised by a particular lady. 'I am not going to demotivate her by criticising what she has done' he said. Well, I was certainly demotivated from attending Mass at the Chaplaincy again.

So there you have it: the majority of the congregation are ignored for the benefit of a privileged elite, a clericalised minority. The majority is regarded as canon-fodder for the experiments, not of the priest, but of this elite. The majority is regarded as less important, less central to the life of the parish, less Catholic. The elite are the important people, the people with the ear of the priest, and perhaps the bishop too. And heaven forbid that priest, bishop, or for that matter Pope, should contradict them.

Here are a couple of quotations from Redemptionis Sacramentum. Paragraph 40:
Nevertheless, from the fact that the liturgical celebration obviously entails activity, it does not follow that everyone must necessarily have something concrete to do beyond the actions and gestures, as if a certain specific liturgical ministry must necessarily be given to the individuals to be carried out by them. Instead, catechetical instruction should strive diligently to correct those widespread superficial notions and practices often seen in recent years in this regard, and ever to instill anew in all of Christ’s faithful that sense of deep wonder before the greatness of the mystery of faith that is the Eucharist....

Para 45: To be avoided is the danger of obscuring the complementary relationship between the action of clerics and that of laypersons, in such a way that the ministry of laypersons undergoes what might be called a certain “clericalization”, while the sacred ministers inappropriately assume those things that are proper to the life and activity of the lay faithful.

Here's Michael Voris on the problem of 'minstries' in parish life.

I'm not sure about the US-style 'direct action' he recommends at the end, but you can understand the frustration.

See also my post about the Traditional Mass and the charge of 'clericalism'.
Posted by Joseph Shaw at 10:46 am