In my last two posts (here and here) I've been saying that a critical attitude is essential to any enterprise. Anyone hoping to achieve anything worthwhile needs relentless criticism to succeed. This might sound paradoxical but it is true: everywhere you find excellence you find a culture of forthright criticism.

A culture in which criticism is not encouraged is soon swamped by mediocrity. Some people, as I described in my last post, actually like mediocrity, since it allows a diffusion of tasks related to the church to people with no aptitude or training in specialist fields from theology to playing the organ. The performance of such tasks is seen as the most important way of participating in parish life, where spiritual participation in the liturgy, prayer in common, and organised practical work in sodalities and guilds is either devalued or unavailable.

A parish in which mediocrity is triumphant is clearly not going to impress visitors with its music or art, with the disciplined harmony of its altar service or the confidence and expertise of its catechists. Plenty of people will react to this by saying that the visitor needs to look beyond the lack of resources to see the zeal of the people. This misses the point: I'm not talking about a lack of resources, but a culture in which mediocrity is king. When you look beyond the drab exterior of such a parish you don't see people trying as hard as they can, but of people accepting second best. You don't see the best person available doing each task, but a heaving pyramid of sharp-elbowed busy-bodies. 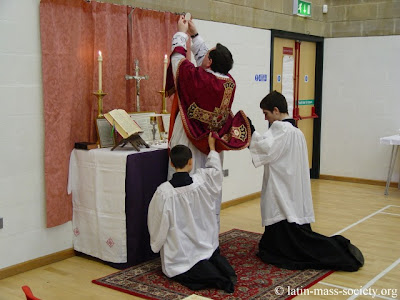 Resources are sometimes hard to find. The reason, however, that there is so little in the way of worthy furnishings and fittings in so many churches is not because they are unaffordable, even if they are, but because they were deliberately removed, sold or destroyed, in the 1960s and '70s, and sometimes more recently. The reason why so few parishes have a good musical tradition is not because it is so hard to create, though it is, but because polyphonic and chant groups were disbanded in the 1960s and '70s, and again sometimes later too. In both cases what was fine, worthy, traditional, and helpful to devotion was deliberately destroyed in favour of the mediocre, for the reasons just described.

One problem with mediocrity which I have not yet touched on is that it drives away talented people. People of musical, artistic or intellectual sensitivity quickly realise they are not welcome, and they flee.

If they flee from the Church as a whole then of course they are wrong to do so: the Church is the Ark of Salvation. We are used, however, to looking at things from the other way round, so let's not blame the ones fleeing but consider how we have failed to help them see the beauty and truth of the Faith.

Talented people who see mediocrity raised on high, praised, and shoved under everyone's nose, can feel very uncomfortable. It indicates to them that the people in this church have no intellectual or artistic tradition, that this faith is anti-intellectual and anti-artistic, as many Christian groups are. It indicates that while they are valued in their own fields, they will not be valued here. Mediocrity is counter-evangelical.

I think most people can tell when a parish fails to rise to great heights of artistry through sheer lack of resources. The state of the building and nature of the parishioners will tell you enough. Such a situation, where poverty is matched with zeal, has made many Catholic artists want to contribute to community life at their own cost, as an act of charity. When artistic mediocrity is matched with pile carpets, expensive sound-systems and a well-heeled congregation, then you know that it is ideological.

(Picture: Michelangelo in his studio, by Delacroix.)

When you start the work of restoration, when you really do want to create something worthwhile with limited resources, then it can be very hard work. Talented people can be very hard to find; when they exist, they are busy and frequently have to move on. I have assisted at many, many Masses where the standard of singing - including my own singing - was not up to scratch, where the serving was inexpert, and where the physical environment was frankly unworthy. I like to remember, in this regard, the years the Traditional Mass was offered, with the full permission of Archbishop Nichols, in a sports hall, because no church was available: see the picture above. You struggle on, and hope you can improve and with time gather more and better resources. I appreciate the difficulties of such situations, and it is certainly not the case that I, or others attached to the Traditional Mass, are not interested in going to Mass where it is offered in a humble setting by people doing their small best (see my response to this absurd charge here). What would be crazy, and not charitable at all, is to pretend that the difficulties of these situations aren't difficulties, and that everything is always wonderful. But the point I am making now is that one of the reasons this is such hard work is because talented people are actually driven away from the Church by the cult of mediocrity. Mediocrity, like excellence, fosters the conditions of its own continuation. Each becomes embedded, mediocrity attracting the mediocre, and excellence attracting those capable of excellence. It is hard to improve parish A because the culture of parishes B to Z has convinced the local population that excellence is foreign to Catholic worship.

And so we have the situation in which people who want to sing, for example, or are interested in fine church furnishings, or even dignified ceremonial, will look to the Anglicans and not to the Catholics. Anglican Cathedrals and centres of High Anglicanism have maintained choirs and all the other things to a much greater degree than Catholic churches. Anglicans were not unaffected by the cult of mediocrity in the 20th Century but more survived. One of the the things we aimed to do by introducing polyphony to the Schola Abelis I set up in Oxford for the Traditional Mass was to provide an outlet in Catholic worship for singers otherwise attached to college choirs singing Anglican Evensong and to the High Anglican centre, Pusey House. Some of these singers are in fact Catholic, but generally speaking they have no opportunity to develop their skills in a Catholic context.

The Anglican Ordinariate is a great opportunity in this regard, and in Oxford it has stimulated the creation of a new group to sing polyphony, the Newman Consort, founded by people associated with the Ordinariate. Doing these things is, however, a constant grind: excellence does not come easily. It is made that much harder when Catholics insist that it is not only not worth the effort, but actually a bad thing. Is it really necessary to point out the achievements of Catholic culture in order to convince people that fine music, architecture and everything else is appropriate to Catholic worship? The High Anglican experiment was, of course, an exercise in bringing into Anglicanism things which were Catholic - Catholic music, Catholic vestments, Catholic ceremonies. For Catholics to reject these things is an exercise in self-hatred.

What earlier generations held as sacred, remains sacred and great for us too, and it cannot be all of a sudden entirely forbidden or even considered harmful. It behoves all of us to preserve the riches which have developed in the Church’s faith and prayer, and to give them their proper place. Pope Benedict XVI

But I need to address one final point: excellence and mediocrity and the issues of elitism and clericalism. I will do that, in the post after next.
Posted by Joseph Shaw at 9:27 pm