This may sound harsh, but following on from my last post I am convinced that the major reason so many people in the Church jump up and down with annoyance and accusations of lack of charity whenever someone voices criticisms is a love of, or at least a deep desire to tolerate, mediocrity. Some geniuses have been thin-skinned but excellence of all kinds requires criticism. Students in Oxford would learn nothing if their work was not criticised. Performing artists need to know the difference between a good performance and a bad one: they need to hear more than just 'Oh that was marvellous darling!!' every single time.
I'm not talking about vulgar abuse, which as I said in my last post should be swiftly deleted from coments boxes, and simply ignored when the abuser has his own blog. By contrast, criticism can be fair or unfair, it can be accurate or misguided, but all of it tells us about how what are doing comes across, what misunderstandings we need to guard against, which techniques we are using work on a particular audience, and what we have missed. Great centres of artistic and academic excellence are centres of insistent and fearless criticism. It can hurt but you learn to live with it and you improve, or maybe you stop wasting your time and try something else.
Working without anyone to criticise is extremely difficult: you can run off into highly elaborated schemes based on flawed foundations and waste years of work. Criticism of practical projects is particularly important because no one has a mastery of all the aspects of a big project and critics can offer much-needed expertise, or at least point in the direction where more attention is needed. Fundamental criticisms, when one finds one's very basic assumptions are being questioned, are essential to avoid 'group think': the situation in which a group of people who share fundamental attitudes also share blind spots about potential pitfalls or objections. Organisations which foster innovation have got to tolerate criticism at every level of generality, ends as well as means.
Being open with criticism is not necessarily correlated with being unwilling to help with a project. Indeed in my experience they are inversely related. After all, criticism is a form of help: it is spending time thinking about a proposal and coming up with objections to it. I have tried and in some cases succeeded in getting many projects off the ground in the Catholic context and it is not the people who think carefully about a proposal and ask 'have you thought of X?' or 'what are you going to do about Y?' who are the problem; it is the people who say 'that sounds nice' but then refuse to help. Worst of all are the people with grave misgivings who are too frighttened of a confrontation to articulate them: in some cases they could be cleared up by explanation, in other cases the project needs to be adapted. Certainly, when people bring me worthwhile prop

osals I aim to give, insofar as I can, both attentive criticism and practical help.
So why are people so against criticisms, and so critical of critics? It is partly because they are in state of 'group think' themselves: they think their position in their group is imperilled by criticising a pet project, and is reinforced by rejecting the criticisms of others. Rational considerations are rejected in favour of social ones. But a major reason is that the mediocrity which results from accepting everything uncritically is actually regarded as a good thing. It is regarded as a good thing because an intellectual and artistic engagement with the Church is regarded as an important form of 'participation', and the great majority of people are not cut out for intellectual and artistic endeavour of great value. Worthwhile art and serious intellectual output is the result of many years of specialist training and practice, as well as native talent, and this is obviously something very few people have. Only at the level of mediocrity can you have members of the parish without serious training creating visual religious art or leading liturgical music, or leading the RCIA course or contributing to discussion groups about Church teaching. And these kinds of participations in parish life are regarded as terribly important; by no means should the parish amateurs be displaced by, or placed under the supervision of, professionals.
Why, one may ask, would any Catholic think that it was important for their (or their children's) ghastly artistic creations to disfigure the church's walls, for their cracked voices to pain the congregation's ears in the liturgy, or for their half-baked ideas about faith and reason to be taken seriously by other members of a discussion group, or, heaven forbid, catechumens? A good question, but notice that they do think so: and they can get very shirty if they sense you don't agree. It seems to be their right to do these things; this is their contribution to the parish. The implication is that if you stop them doing these things you leave them without an outlet for their devotion.
One purported justification of mediocrity is the Protestant-Romantic idea that the product of deeply-felt passion and spontaneity is actually of greater worth than the product of training and skill. This of course is deeply at odds with the Catholic artistic and intellectual traditions, but it is a widespread notion. With this you just have to be tough: you as an individual may be offering all you have to God, but that doesn't mean it is the best we as a community can offer Him.
Another justification, and this is the more important, is that the ordinary parishoner's spiritual participation in the liturgy is no longer understood or valued by many Catholics, and appropriate outlets for Catholics without special artistic or intellectual skills have largely been destroyed: the guilds and sodalities which used to characterise parish life, particularly those devoted to the corporal acts of mercy. All that is left is apologetics and catechesis, and artistic contributions to the liturgy. 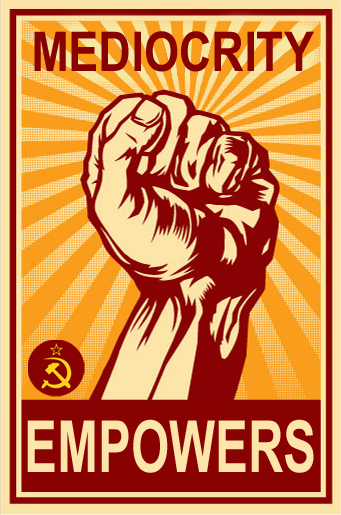 Of course I'm all for as many Catholics as possible learning about the Faith and learning about singing and art, but we have the situation today in which catechesis, as well as music in the liturgy, seems too often to be directed by people without serious knowledge or training: the well known stereotype of the modern Church, the lay RCIA director, being something to bring a chill to every spine.
I was delighted to find this last image on the web: 'Mediocrity Empowers'. That is absolutely right. To be crass about it, we desperately need to disempower the people who have been empowered by mediocrity. We also need to have more training in music, art, and theology and other subjects, and this is perhaps beginning to happen. But the people with real skills can actually be feared and hated, because they spell the end of the tyranny of mediocrity, and the return of criticism. Catholics don't need less mutual criticism, they need more - far more.
Far too many people, particularly good-natured priests, feel they need to endure the second-rate to avoid hurting anyone's feelings. This policy is understandable but it is disastrous, since it quickly leads to the tyranny of the mediocre and the loss to the Church of the genuinely talented.
Now I've got going on this theme, I'll post about this last point tomorrow: how the mediocre drives out the excellent.
Posted by Joseph Shaw at 10:13 am