Our Lady of Walsingham and the doves 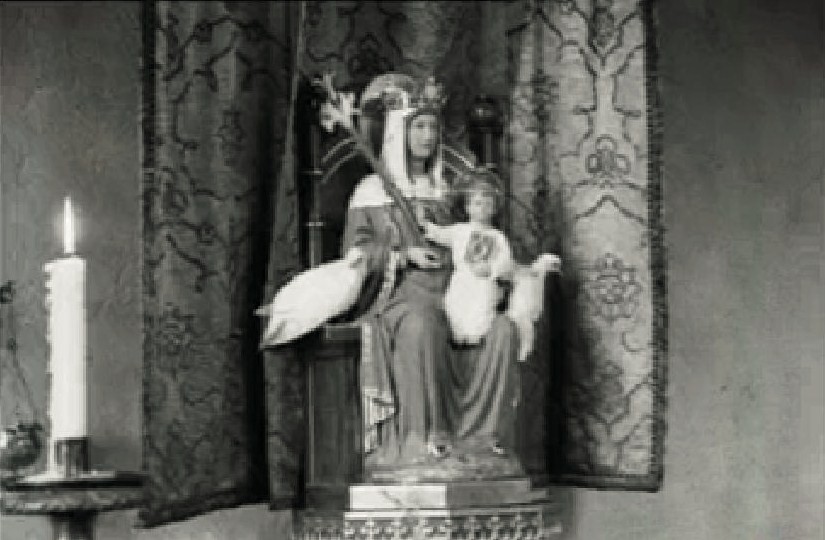 I am catching up with the blogs (having been away from proper internet access for a while) and I don't want to let this post by the Reluctant Sinner to pass without comment, since it relates to Walsingham, to which I've been on pilgrimage recently myself.

It seems that, in a remarkable parallel to events surrounding the crowning of the shrine image of Our Lady of Fatima in Portugal, when the shrine image of Our Lady of Walsingham was crowned in 1954 two white doves settled on the statue and remained perched there for its journey from the site of the Holy House and Abbey in Walsingham to its permanent home in the Slipper Chapel. It was captured by Pathe News on film.

This is not a very big miracle; we might call it a consolation. If we take it seriously at all it is a mark of divine favour, certainly not one of dogmatic authority but there it is, for each person to judge as he sees fit. I think it is interesting not only as an endorsement of the restored cultus and shrine of Our Lady of Walsingham but in connection with the coronation of the statue itself, undertaken by special mandate of the Holy Father, Pope Pius XII, on the Marian Year he had declared. The involvement of Popes and of our own bishops in approving, commending, and honouring shrines is something of great importance; it is not an irrelevant rigmarole. We don't make our own religion, it is in union with our bishops and the Pope and in continuity with past generations.

Other officially crowned statues of Our Lady I have seen include the statue of Our Lady of Consolation at West Grinstead in Sussex, which I think was the first such statue in England, Our Lady of Caversham outside Reading and of Our Lady of Willesden in London. There are Latin Mass Society pilgrimages to each of these; the one to Willesden is coming up (29th October). It would be good to see a list of officially approved shrines in the Catholic Directory; there seems to be no published list of them.
Posted by Joseph Shaw at 11:38 am