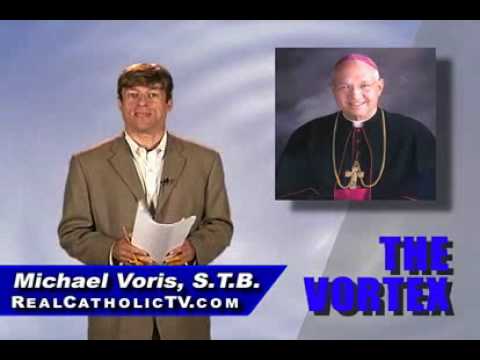 "If I say to the wicked, 'You shall surely die,' and you give him no warning, nor speak to warn the wicked from his wicked way, in order to save his life, that wicked man shall die in his iniquity; but his blood I will require at your hand." (Ezekial 3:18)

When I posted my reaction to Michael Voris, I said that since I thought he was basically a Good Thing I would show my appreciation by criticising what I took to be the main point of his talk. I wasn't joking: since I am basically well disposed to what he had to say, it is useful to him (in the unlikely event that he reads it) and to others to make a critique of what he said. In fact I thought his message should have been more nuanced and balanced.

Inevitably I was criticised myself in the com-box by some of his many fans - since this blog is pretty obscure I got off lightly, I know others who've criticised Voris have been deluged. These fans say that I shouldn't criticise Voris for the very reason that I think that it is important to criticise him: that is, because despite his limitations he is basically a Good Thing.

Presumably Voris himself agrees with me, since he is famous for being critical, and indeed for criticising not just the lunatic fringe liberals but apparently conservative groups like the Knights of St Columbus. Those fans of his, who infest the com-boxes of bloggers who dare say anything critical of Voris, don't seem to be alive to the irony of attempting to silence criticism of a man whose entire apostolate is based on the justification and indeed necessity of criticing fellow Catholics. If we shouldn't criticise Voris, then a fortiori Voris shouldn't criticise anyone else, especially bishops. If these fans had any sense, they'd welcome criticism of Voris in the spirit of a healthy and charitable debate.

The bigger question is whether a healthy and charitable debate is indeed an ideal, or whether we Catholics should be stifling public criticisms of each other in the interest of presenting a united front, or (where applicable) respect and obedience of legitimate authority, or simply because we think that charitable debate is impossible and we want to avoid acrimony and divisiveness. Let me address these objections in turn.

1. If we criticise fellow Catholics, we give scandal to non-Catholics.
This may indeed happen, but it is a far greater scandal to non-Catholics to see a public sinner or dissident being treated as if nothing were amiss by his fellow Catholics. When theologians who publicly dissent from Catholic teaching, or politicians who vote for abortion, are feted in Catholic institutions and lauded on Catholic blogs this very clearly and directly undermines the witness of the Church to the truth of her teaching. St Paul repeatedly says that the Christian community should ostracise and eject such people (2 Thess. 3:14; 1 Cor. 5:13; 1 Tim. 1:20). A community united by a set of beliefs will simply cease to exist if it tolerates as fully-paid up members those who do not share the beliefs.

Catholic bloggers are not the most important line of defence here - it is for bishops to reprove formally, and ultimately to excommunicate - but they do have obligations. They should not contribute to the idea that people are model Catholics because (like the Kennedy clan, for example) they are so rich or well-connected or otherwise influential that everyone is too frightened to point out that they have departed from the Faith. A vigorous rejection by a wide range of Catholic voices of the views of dissident Catholics is the best possible witness we can give to non-Catholics, given that we can't make the dissidents disappear.

2. Criticism is incompatible with respect and obedience to legitimate authority.
St Paul criticised St Peter; St Catherine of Siena criticised a series of popes. This is certainly something which has to be done with great care, and I'm not recommending it, at least in normal circumstances (normal for today, I mean). It can easily be counter productive, for one thing. But criticising those in authority is certainly not ruled out in principle by obligations of respect and obedience. Our bishops give us very clear teaching on this, by (rightly) criticising the civil authorities. We owe the civil authorities respect and obedience. We can still criticise them, and indeed we often must. However, it is usually enough to criticise ideas rather than individuals, if we want to avoid the impression of disrespect for those in authority. The point should never be a personal attack, but a point of principle.

'Conservative' Catholics and liberal Catholics sometimes seem to share a blindness to the distinction between dogmatic and prudential matters, and also to between authoritative public teaching and off-the-cuff or private statements. On issues of faith and morals, authoritative statements by those in the Church with authority to teach have prima facie force and should be accepted by the faithful, although the faithful can't be expected to accept contradictory statements, as would happen if a priest or bishop contradicted another authoritative statement. And here it should be noted that the docility of the faithful is as much, indeed more, to be measured by their acceptance of the decrees of Lateran IV or the Athanasian Creed as by the latest pastoral letter from their local ordinary. On prudential issues, matters of policy, tradition has a lot to say and priests and bishops have the grace of their offices in governing their flocks, but they are not preserved from error and debate may be an essential part of getting things right. (Also see my series about obedience.)

3. Charitable criticism is impossible so we should have no criticism at all.
It is certainly a problem for bloggers that sweet reason can be overwhelmed by the 'crazies'. The internet, it can seem, belongs to those who are least averse to staying up all night ranting. I actually think that this is a passing phenomenon: increasingly blogs are refusing to accept anonymous comments and swift moderation should mean that rants are online, attached to respectable blogs, for a very short space of time. The most widely read sites are the ones which are reasonably sane and the internet makes it easy to show that really crazy ideas contradict on-line Church documents and the like.

The other thing we all need to get used to is the instant publication of our views. The internet is a hasty forum and people blurt things out in a way they might in a saloon-bar discussion, and it is there for the whole world to see forever. I have said it before, we have to accept that the blogs are more like people sitting round in a pub than a carefully researched monograph; while being careful ourselves we shouldn't get too upset when other people seem to fly off the handle. Certainly we shouldn't forget the advantages of the medium: the instant correctability, the ability to link to photographic or video evidence or textual sources, the linking up with scholars and specialists as well as ordinary Catholics.

Debate about the application of the Church's teaching to new situations, and to prudential matters, has always taken place in the Church, and it is not only inevitable but frequently very important. When St Bernard of Clairvaux said that St Peter the Venerable was wicked from the top of his head to the soles of his feet, or when A.W. Pugin said that the classical style of architecture was unfit for Christian worship, they were getting a bit too excited. But you can't stop them, and you shouldn't want to stop them, engaging in criticism and debate. What we might want to do is make the debate more calm and charitable.

There is an deeper issue here, however, and that is mediocrity. The love of mediocrity leads to a hatred of criticism; I actually think this is a more important motive in the attempt to stifle criticism than concerns about giving scandal and charity. I'll post about this next.