In my post about early morning Masses in St Peter's, I included a photo of one of the chapel murals: an intriguing but obscure scene. I've now been told (by our Rep for Clifton, no less!) what it depicts.
Here's the picture. 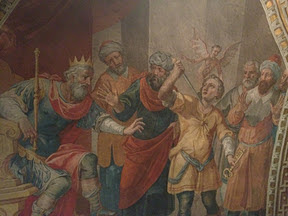 The thing I missed completely when I posted it was that the fellow about to commit suicide is clutching a key. This wouldn't have helped me all that much but it seems his demonic possession and suicide in front of a king is the punishment for his sacrilege in attempting to steal the key which decorated St Peter's tomb.
I am told: "The fresco is to be found in the Chapel of the Madonna of Partorienti. It was painted by Giovan Ricci da Novara, between 1618 and 1619. The panel is one of several by da Novara, and represents 'The Longobard and the Key of St Peter', which is an episode narrated by Gregory the Great. The Longobard is the man committing suicide. He tried to break the golden key from St Peter's tomb and then, taken over by an evil spirit, he slit his own throat. The enthroned king is Autari, the king of the (Arian) Lombards, who repairs the damage done to St Peter's tomb. "
Posted by Joseph Shaw at 3:14 pm