The other day Diane Taylor, Secretary of Ecclesia Dei New Zealand (the New Zealand affiliate of the Una Voce Federation), visited Oxford; we had lunch together. Here she is looking at the relics in the Relic Chapel of the Oxford Oratory. 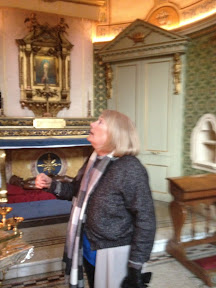 It's pretty unusual to be visited by members of the Una Voce Federation from the other side of the earth, but having come to Rome for the Federation meeting Mrs Taylor decided to make the most of it.

In the capital, Aukland, New Zealand has had for some time a church dedicated to the Traditional Mass, served by a priest who looks after a regular congregation drawn from far and wide. This is an important precedent for the developing situation in England: a church shared between a parish and the Fraternity of St Peter in Reading, an official 'Chaplaincy' of the Fraternity in the Diocese of Northhampton, and the agreement between the Bishop of Shrewsbury and the Institute of Christ the King which gives them the use of the Church of SS Peter & Paul in the outskirts of Liverpool.
Posted by Joseph Shaw at 9:38 am