Yesterday we attended Mass at Sta Trinita dei Pellegrini, the church of the Fraternity of St Peter's in Rome, for their 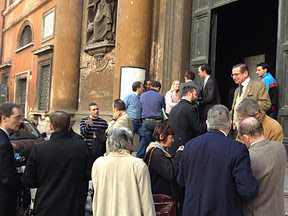 regular Sunday Solemn Mass. I was delighted to see not only Fr Kramer FSSP, the Parish Priest, but also Fr William Barker FSSP, whom I saw ordained in Wigratzbad only two years ago. He is Fr Kramer's deputy. 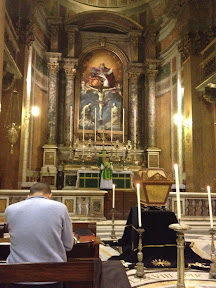 I was in fact back there in the evening to attend Mass with my wife Lucy who had just arrived, and that (Low) Mass was celebrated by Fr Barker himself. At the end of Mass he blessed a beautiful catafalque (with the Libera nos and the full cermony, as at the end of a Requiem), a custom they have for the first 8 days of November. 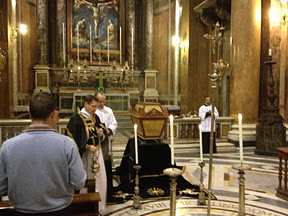 It was very noticable to me how numbers have increased since two years ago. In 2009 the 10.30 Solemn Mass was well attended, but this time the church was full. There was a free place here and there but you had to look for them, and there were people standing at the back. This is a great testimony to the hard work of Fr Kramer, and the excellence of the liturgy, and very good polyphonic choir.

In addition it should be noted that, as I was told by another priest, there are now no fewer than eight places where the faithful can attend the Traditional Mass in central Rome on a Sunday - not counting the SSPX.

- Posted using BlogPress from my iPhone