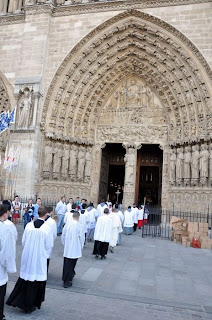 The Chartres Pilgrimage is complete for another year, and the pilgrims have a chance to recover, upload their photographs, and blog about it. Counter Cultural Father was there; the official photos are available; I've had a problem with most of mine (cough), so I'll be pinching other people's; these are from Notre Dame de Chrétienté, the organisers. 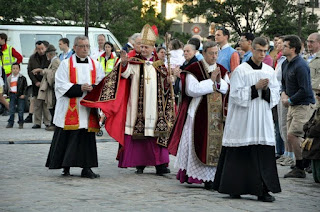 It is quite simply the biggest event of the traditional Catholic calendar. Depending on where you start from, the Camino to Compostella is likely to be a lot longer, but the Chartres Pilgrimage is a single, huge movement of people on the same pilgrimage, attending the same Masses, blessed together at the beginning and the end. The sense of solidarity with so many thousands of other pilgrims is extraordinary. We fill every inch of Notre Dame de Paris at the beginning, and overflow into the square in front of Notre Dame de Chartres at the end. 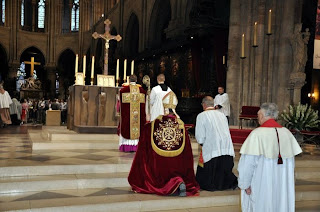 For various reasons (including economic ones, I suspect) numbers have fallen in recent years; I think this is an event which should be supported with more vigour internationally. One of the founding organisers of the Australian 'Christus Rex' pilgrimage said to me that the it was valuable to have an event each year which acted as a 'gathering of the tribe' for the Traditionalist community in Australia. The Chartres Pilgrimage does that for France, but also for the whole world. Traditional Catholics need an opportunity to meet others from other parishes and nations, served by different orders or dioceses, and sustained by distinct traditions of popular piety, to sing together, to share experiences, to grow in mutual understanding and respect. 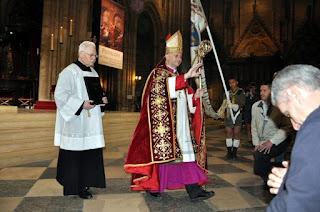 There is something uniquely and wonderfully Catholic about the pilgrimage. The different national flags and banners in honour of the patron saints of the different groups, the variety of songs and devotions, all united in one great religious act. In what other context, than a Catholic one, could one see a German flag the size of a football pitch (so it seemed) march across the French countryside, not only in peace, but in solidarity a French pilgrimage and for the conversion of France? 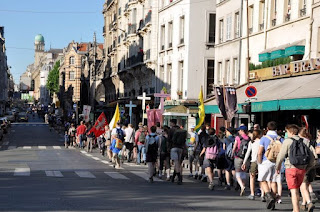 I seem to have a particular kind of luck with the Chartres Pilgrimage: I've been twice, and it has been exceptionally hot each time. In between, last year, it rained. So my abiding memories of the Pilgrimage remain tinged with baking heat, interspersed with the blessed shade of the woods, which we walk through a lot, but not all, of the time. The keynote of this year's pilgrimage was exhaustion: I didn't strain my muscles, or get lots of blisters, or even heat stroke, but I just felt, and in fact to an extent still feel, too tired to move. By the second afternoon I started to notice groups of pilgrims dropping out at each medical post, manned by the Order of Malta first aid teams, where they could be picked up and ferried onwards. The pilgrimage may be demanding, but they are there to help if you really need it. 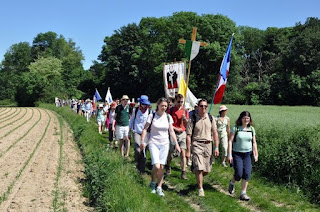 The self-inflicted suffering of the Pilgrimage is a guarantee of its seriousness. Yes, it is hugely rewarding, even at the human level, it is great fun, you meet lots of great people, learn lots of songs, and have really earned a nice meal and a drink by the end. But few people would do this to themselves for those kinds of benefits. It is a spiritual event for a spiritual goal, and the suffering, which is perfectly real, and shared, is part of what we can offer to 'le bon Dieu' in gratitude and in supplication, in union with the sufferings of Our Lord in His Passion. This is the most important kind of solidarity, after all: solidarity with Him. 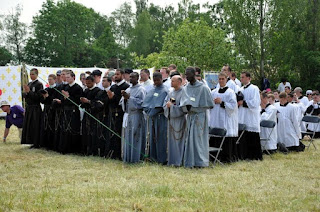 For (I think) only the second time ever, we had Mass in Notre Dame in Paris, and not just the Pilgrims' blessing; the blessing by an auxiliary bishop of Paris followed Mass. This makes sense in terms of the itinerary, and in every other way, and I hope it becomes a permanent feature of the pilgrimage, even though we used the strange modern altar instead of the historic High Altar, and had a Missa Cantata rather than a Solemn Mass (in the presence of 200 priests!): the organisers have proved themselves masters at incremental rapprochement with the hierarchy, and this is something to build on. Before the Mass for all the pilgrims, priests say private Masses in the side chapels from a very early hour; I saw some finishing last time I was there. 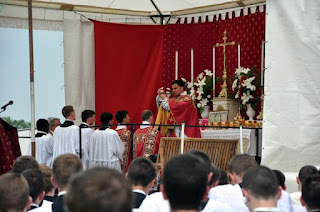 Mass on the second day was a Solemn Mass in a field, with the very impressive portable sanctuary which they use. This year my group was outside Chartres Cathedral for the final Mass - we filled the square as well as the Cathedral with people - and saw the Solemn Mass, celebrated by Fr John Berg, Superior General of the FSSP, on an enormous screen outside. As in Paris, the local Bishop seems to be participating in the proceedings with increasing enthusiasm, blessing us as he went in and came out again. 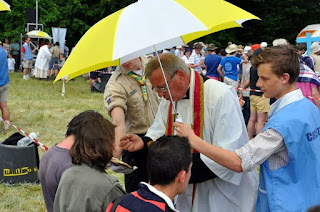 The British Chapters walked (by arrangement) next to the Australian Chapter, which doesn't come every year, but we had dinner together afterwards, and after spending the night in Chartres we had Mass in the Cathedral crypt. We had the use of the biggest crypt chapel, that of the ancient Shrine of Our Lady Sous Terre ('under ground'), where Our Lady's shirt is also preserved. For the first time we were able to get the singers together (just about!) to make possible a Solemn Mass, celebrated by Fr Mark Withoos of the PCED, which was wonderful. 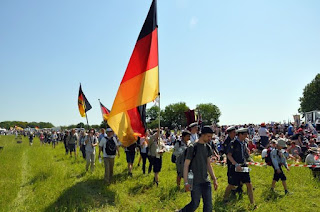 The British Chapters are very well supplied with priests: we had four (Fr Withoos, Fr Andrew Goodman, Fr Gerard Byrne, and Fr Martin Edwards), not counting the British chaplains of the Chavagnes International College chapter (an English-speaking school in the Vendee), Fr Bede Rowe and  Fr Alexander Redman, plus Fr Anthony Mary of the Sons of the Holy Redeemer, all of whom were nearby most of the Pilgrimage, and Fr Armand de Malleray FSSP, who is based in Reading, England, who joined us from time to time. We also had two FSSP Seminarians with us, Alexander Stuart from Denton and James Mawdsley from Wigratsbad. Surprisingly, many French chapters didn't have their own chaplains, I suppose their priests can't get away from their apostolates at the weekend so easily. 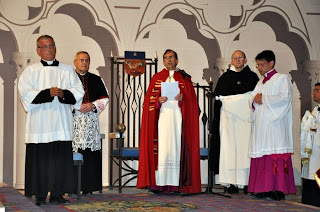 The Chartres Pilgrimage is unique, and I recommend it to everyone. It is something to experience once, if that's all you can do, though many find themselves coming back year after year. This year the Latin Mass Society sponsored ten places, cutting the price by £100; I hope that in this and in other ways we can build up numbers. But we'd like to see more pilgrims from all over Europe, and the world; currently non-French groups make up only about 10% of the pilgrims. So put this in your diary: Pentecost weekend next year, Friday to Monday, is 18th to 20th May 2013. Maybe it'll be a little cooler!

In the meantime, come to 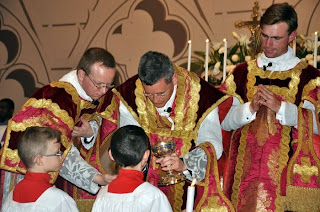 For American readers, you can do the Pilgrimage for Restoration to Auriesville, New York, September 28-30;

in Australia, the Christus Rex Pilgrimage is 25th to 28th October 2012.

I know there are others too in other countries (I'd be interested in links to their websites, in fact). In Medieval Europe pilgrims were everywhere; let us restore this tradition, and convert our once-Christian countries back to the Faith.

Update: Here's a link to the Canadian Pilgrimage to Our Lady of the Cape, 1-3rd September 2012.