Loftus, Modernism, and the Resurrection 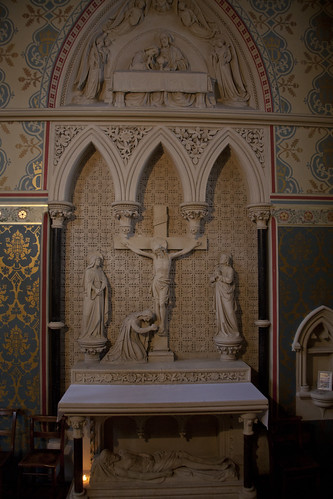 I think it is particularly appropriate to post this in the days after the permanent suppression of Deacon Nick Donnelly's blog 'Protect the Pope'. I will have more to say on the contrast between the cases of Mgr Loftus and Deacon Donnelly in another post.

While most Catholics are celebrating Christ's victory over death, Mgr Basil Loftus is desperately playing it down, as he has year after year at Easter time in his Catholic Times column.

The Catechism of the Catholic Church tells us that

643 Given all these testimonies, Christ's Resurrection cannot be interpreted as something outside the physical order, and it is impossible not to acknowledge it as an historical fact.

But it is precisely this which Loftus wants not to acknowledge. In 2010 he distinguished 'facts' from non-factual elements in the Gospel accounts of the Resurrection, in order to deny that the Resurrection on the third day was a 'fact'. In 2011 he wrote:

Again: 'the New Testament is not a historical account of the resurrection.'

Having dealt successively with facts and historical matters, in 2012 he denied that it was an event in the physical order.

Christ's Resurrection from the dead means that a fully-fledged member of the human race, a man like us in all things but sin, has entered into the glory of God and taken on a new spiritual existence.

This year he tells us that all the things in the Gospels which support the Catechism and contradict him are merely 'artistic licence'. They weren't factual, historical, or physical. This seems almost obsessive: what's going on?

What is going on is a classic Modernist mindset at work. Modernists are motivated above all by fear of Science. The worry is that Science deals with facts. Science is on the march. Science is against Religion. Any facts, anything historical, anything physical, is the domain of Science, and any theologian foolish enough to make factual, historical claims, claims about physical things, is exposing himself to contradiction by Scientists. The way to defend the Faith from the onward march of the Men of Science is by saying that none of the things which are important to the Faith are inextricably connected with any factual, historical, or physical claims. 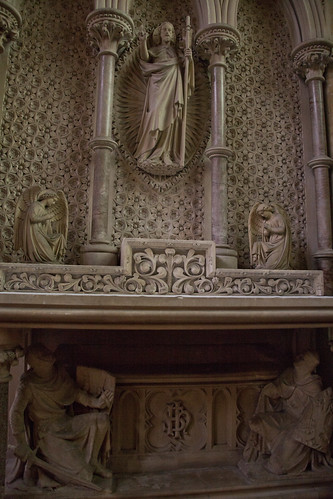 You have to remember, of course, that this way of thinking was developed in response to the scientific triumphalism of about 150 years ago, and even this depended on philosophical developments in the 18th century. It is about as 'modern' as the horse-drawn cab or gas lighting. It is not, however, so much a theory or a claim, as an instinctive cringe towards Science; as I have called it, a mind-set. This makes it all the harder to dislodge. You can say the Modernist: look, really, no scientist is going to provide evidence that the Resurrection didn't happen, at this distance of time that particular worry just doesn't come into it. But he will just just give a little nervous titter and insist that it really is so much better, yes believe me my dear fellow, not to leave any hostages to fortune by making historical claims which look so implausible. I mean, a man rising from the dead. That kind of thing has hardly ever been known to happen: as a matter of historical science, it is unlikely, therefore, to have happened on this occasion.

Yes, that really is how they argue. You can point out that there is nothing actually impossible about walking on water, we are just talking about God applying a force to counter-balance gravity at a particular time and place, and if we believe in God at all surely this is the kind of thing He can do. The Modernist will just wring his hands quietly and say that you can't appeal to that kind of intervention in Science. The Men of Science don't allow it. We can talk about Jesus walking on water, yes of course we can, it's a nice story, but what's important, surely, what is really important, is not the physical side of it but the spiritual lesson Jesus was trying to teach, or better still what the Evangelists were trying to teach when they made up the story (oops, did I really say that?).

The Resurrection is a tough one because it is particularly clear in this case, as it is in fact often the case with miracles, that the spiritual significance of the event depends upon the physical reality of it. As St Paul says, if Christ did not rise from the dead, our Faith is in vain (1 Cor. 15:14) But the idea that the whole of the Christian Faith depends on the historical truth of an event so prima facie unlikely as a man rising from the dead gives the Modernists the vapours. They just have to do something to give the Faith a more secure foundation - as they see it. Never mind about conjuring tricks with bones, what's really important is that Jesus' message is alive in our hearts. What does it matter, after all, what happened to Jesus' physical body? And at this point you realise that abandoning the realm of 'facts' to Science also entails a complete abandonment of incarnational theology: the theology of God becoming flesh, and indeed of human beings being physical beings and not just gibbering ghosts temporarily associated with a bit of skin and bone.

Loftus gets particularly vague at this point, clinging on to the Incarnation but saying that the rest of it is just a 'mystery'. But if the Incarnation was a historical event, and the Virgin Birth which went with it, why not the Resurrection?

Loftus wants to lift a burden from his readers: the burden of having to believe and defend unnecessary historical, factual, physical claims. Freed of that crushing burden, they can enjoy the life-giving spiritual lessons of the Gospels. The problem is that, without the factual stuff, the spiritual stuff doesn't make sense: to paraphrase St Paul, if Christ has not risen, we've been duped. The Church agrees with St Paul, and Modernism has been condemned up hill and down dale, and, on top of that, is now thoroughly old hat. Loftus continues to beat the dead horse, pathetically, and for some reason The Catholic Times continues to print it.

As I have said before, this madness must stop. 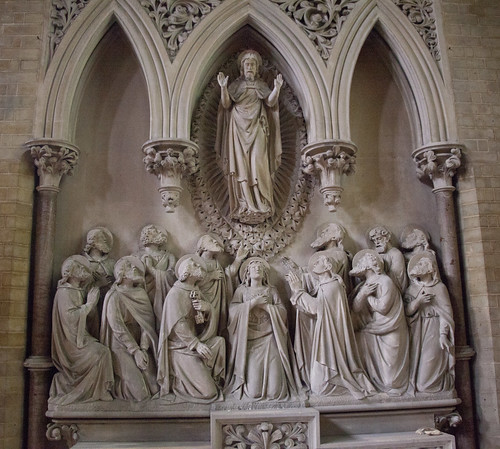 Photos: Mysteries of the Rosary from St Dominic's, Haverstock Hill (a Dominican church).
Posted by Joseph Shaw at 10:00 am