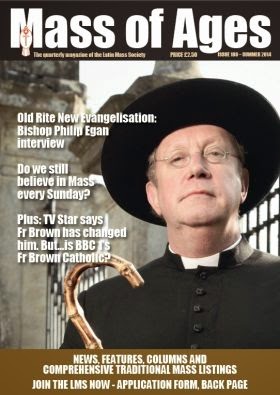 The latest edition of the Latin Mass Society's quarterly magazine, Mass of Ages, has arrived on the doormats of members and is available to buy from the usual outlets, including your friendly local Represenative.

This is the first edition of a new editor, Sarah Atkinson, who has an exclusive interview with Bishop Philip Egan.

Mark Williams, the actor who plays the title role in BBC1's Father Brown series, also speaks to Mass of Ages about the challenges of the role.

We have a report from Germany on the work of Pro Missa Tridentina, our sister organisation.

We have a new column, 'At Mass With...', in which someone who has not been to a Traditional Latin Mass for many decades, or ever, tries out the Extraordinary Form and tells us about their experience of the Old Rite for the first time. First up is Timothy Whitebloom, Grammy award-winning producer.

We have a feature about the Thomas More Legal Centre and its founder barrister Neil Addison, and the first of a regular series about life in parishes where the Old Rite is regularly celebrated.

Plus all our regular features, comment and opinion pieces, our quarterly look back into the LMS archives from past decades, your letters, and a prize crossword, plus full listings of Traditional Masses across England and Wales, and much more besides.

The Sussex town of Lewes is most notorious for its Guy Fawkes Nights in which an effigy of the pope is publicly burnt to the cheers of the crowd. However, Fr Jonathan Martin, pastor of the Catholic parish of St Pancras in Lewes, speaks to Mass of Ages about a rather more edifying spectacle in the town - the regular Extraordinary Form Mass that he celebrates there and its effect on him and his parishioners.
Read more>>

Clash of Civilisations? Sacred sounds in a secular world

We speak to Matthew Schellhorn, professional pianist, who has just released his first CD of 'Stations' by Ian Wilson, inspired by the Stations of the Cross. When he is not touring concert venues, Matthew, who has performed on Radio 3 and Classic FM, is the LMS's Local Representative in Southwark diocese.
Read more>>