Yesterday took place the Latin Mass Society's revived 'Tyburn Walk', the traditional devotional walk from the place of imprisonment to the place of execution for 105 Catholic martyrs during penal times.

It starts beween St Sepulchre's Church (on one side of the street), and the site of Newgate Prison (on the other side), where the Old Bailey stands. We gathered there around Fr Nicholas Schofield, who is not only the LMS Chaplain for the South East, but a published historian, and very well informed about the English martyrs.

We walked up Holborn to St Giles Church, the historic church where the condemned were traditionally given a cup of ale. We said a decade of the Rosary there.

We then went to the Catholic church of St Patrick's Soho Square, where Fr Schofield celebrated Low Mass for us, thanks to the hospitality of the parish priest Fr Alexander Sherbrooke. 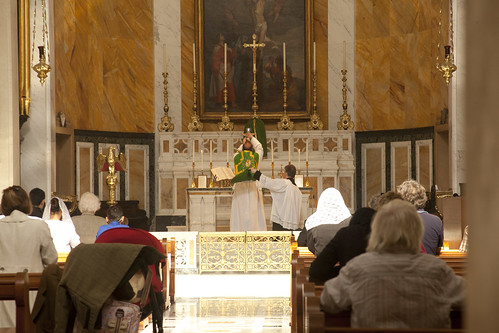 We also venerated a relic of St Oliver Plunket, who was the last, as well as the most senior, Catholic martyr to die at Tyburn: the Achbishop of Armagh and Primate of Ireland, caught up in the fictitious 'Titus Oates' plot.

After St Patrick's, we were on Oxford Street, where the crowds were denser. However walking here was no more difficult for us than for any of the other pedestrians. There were about 45 of us, but we didn't march in close formation, we just walked along like everyone else. The problem of disrupting the shoppers or traffic really didn't arise.

At Marble Arch we said a final decade of the Rosary at the plaque in the ground marking the site of the Tyburn Tree, the infamous gallows, before going to the Tyburn Convent for Benediction.
The Tyburn Walk was for many years organised by the Guild of Our Lady of Ransom, and in the early and mid 20th century was a major event, with more than a thousand Catholics taking part. The traffic was stopped and they had benediction at the end from the balcony of the convent. It was finally discontinued in 2007. Appropriately, our chaplain yesterday, Fr Nicholas Schofield, is a member of the Guild's Executive Committee.

Support the work of the LMS by becoming an 'Anniversary Supporter'.
Posted by Joseph Shaw at 12:36 pm