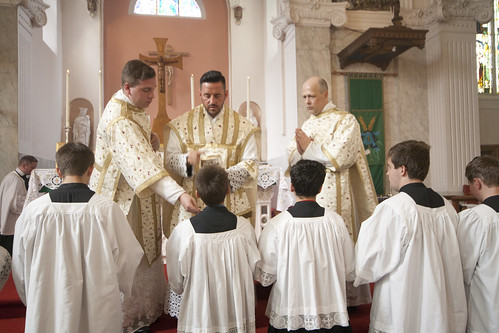 There must be no more post-conciliar winters, such as that which for nearly 50 years followed Vatican II, inhibiting new growth.

This is a pretty amazing assessment of the recent history of the Church, from some one who claims to support the message of the Council.

For most of his column for the Catholic Times, published on 29th August, Mgr Basil Loftus engages in one of his rambling explanations of why his every wish has the backing of the law of the Church, and in particular the Council, while nevertheless everyone else's is against the law of the Church.

The argument can be summarised in this way. When it comes to stopping people receive Communion on the Tongue:

Seriously unbalanced prejudice, whether it proceeds from a Roman Congregation or from an individual fundamentalist bigot [i.e. someone who prefers to receive on the tongue], is not a 'rightful expectation'. A local bishop in those circumstances is the equivalent of the military would call the 'field-commander'. He calls the shots.

When it comes to local bishops' failure to set up diocesan (as well as parochial) 'pastoral councils' of lay people, on the other hand:

The continuance of monarchical rule by certain bishops frustrates the rightful expectations of priests and people to share in the governance of the Church.

Right, so that's clear then, isn't it? When a bishop contravenes the right of the faithful to receive on the tongue, which is established by custom going back more than a millennium and affirmed by the latest Instruction from the Congregation for Divine Worship (Redemptionis sacramentum 92), that is right and proper.

When a bishop fails to adopt something merely suggested by a Council document, in this case Apostolicam actuositatem 10 (even Loftus concedes the bishop 'is not directly breaking a law of the Church. Such [pastoral] councils are merely 'earnestly recommended'.'), then that is wrong: 'a dishonest flanking manoeuvre by those in authority', which should be met with noisy opposition by priests and people. Never mind that after exhaustive experimentation the bishop may have concluded that these councils are unworkable, and in practice undermine the authority and even the identity of bishops and priests as taught by the same Council. 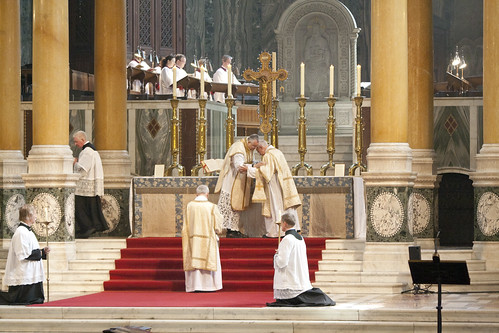 I must share with readers this passage about how to avoid passing on the Ebola virus in Mass.

I would go further than the Cardinal [Oneivikan] and say that when such infection rages it would perhaps be wise simply to invite people to help themselves to Hosts. Even to place the Host in a communicant's hand negates the very advantages gained by omitting the Sign of Peace. The few prelates in the Vatican who may die of apoplexy would be more than compensated for by those whose lives could be saved.

Very droll, Monsignor. But you are forgetting that multiple people fishing out items from a shared dish is notoriously unhygienic. The claim that peanuts in a bar were found to have urine on them from 27 different people appears to have a source no more authoritative than Johnny Depp on a chat show, but, while exaggerated, the principle makes sense. Unless you are using tongs, you're going to touch more than one Host as you get it out of the ciborium; if you are using tongs, the tongs themselves will become an infected surface, which you touch with the same fingers that you are going to use to put the Host in your mouth.

The fact is that, if an infection is really serious, it may be necessary to suspend the distribution of Communion altogether, for a period. The distribution of the Chalice to large congregations has never been recommended by the Church, and from a public health point of view it is asking for trouble. Priests should be taught how to distribute Communion on the tongue without touching the Communicant's tongue.

For the record, I must also include Loftus' latest rant about the new translation of the Novus Ordo Missal. Loftus doesn't like to see an opportunity to beat a dead horse go to waste.

The hijacking, for instance, of the new English translation of the Roman Missal by the Roman Curia, with its resulting frequently indecipherable and unintelligible syntax and vocabulary, made a mockery of powers given to the bishops by Vatican II.

Keep going, Basil! I'm sure those dreadful people in Rome will cave into your rhetorical onslaught one day. 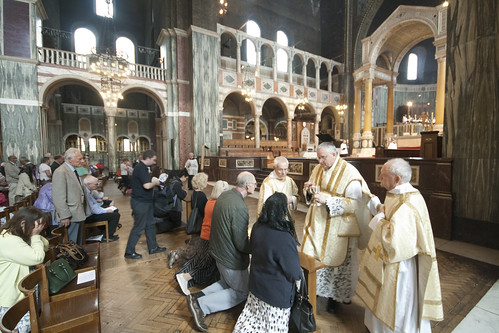