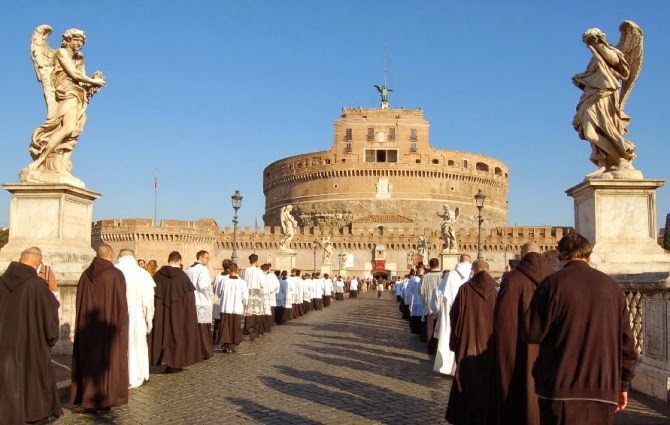 Time is running out to book on this pilgrimage, please don't leave it till the last minute! The deadline is 10th September.

Cardinal Pell has agreed to celebrate Mass in the Extraordinary Form on 24 October and Cardinal Burke has committed to celebrate in the Old Rite on 25 October. Both these Masses will form part of this year's pilgrimage.

Organised by an international group of friends of the Traditional Latin Mass (The Cœtus Internationalis Summorum Pontificum), this annual Summorum Pontificum Pilgrimage to Rome is at the same time an act of gratitiude to the Holy See for the landmark recognition in 2007 of the legitimate legal, moral and pastoral status of the Old Rite, and also a reminder that the Traditional Mass is here to stay and has so much more to offering restoring the Faith in the wider Church.

There will be members of the faithful attending from around the globe. The Latin Mass Society has decided to organise travel and accommodation to anyone from England and Wales who wishes to attend what promises to be a spectacular and inspiring few days in the Eternal City.

The LMS package includes:
Air flights to and from Rome Fumicino airport from London Gatwick
Coach transfer between the airport and hotel
Four nights' accommodation in a hotel close to the Vatican (bed, breakfast and 3-course evening meal)
Inclusive day-trip by coach to Norcia, home of St Benedict and now home also to a community of Traditional Benedictines.