Receptions into the Church: what makes the difference? 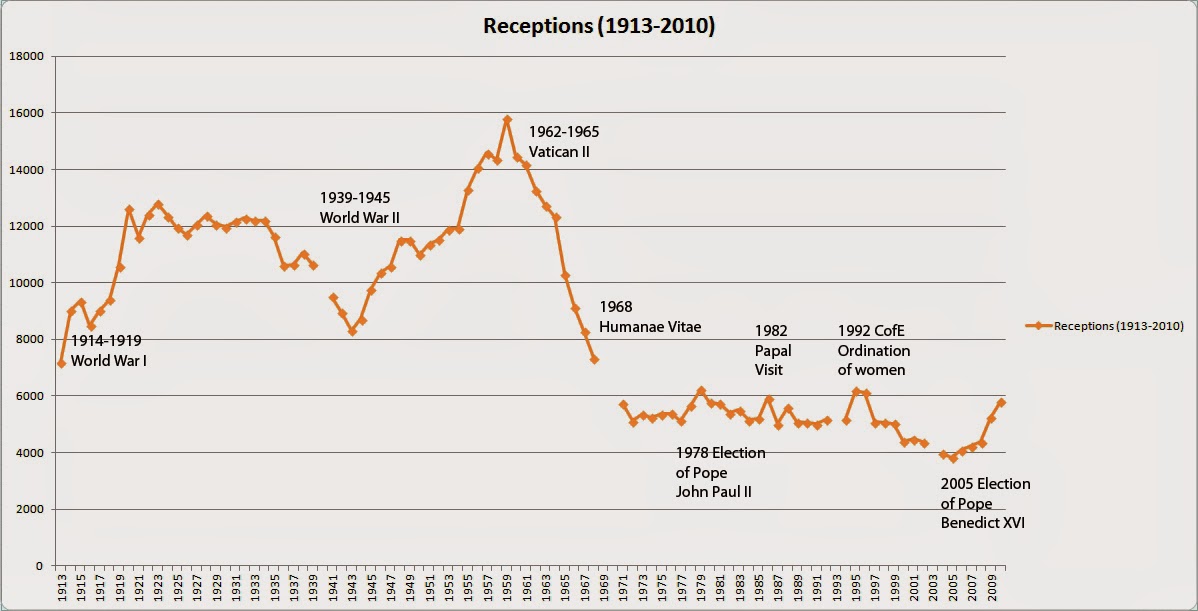 The Tablet reported last weekend that the number of receptions at Easter this year will be the lowest for six years, having peaked in 2011. Not all converts are received at Easter, but one would expect the trends to be closely correlated. After the end of this graph, which goes up to 2010, then, it started going down again.

The 'bounce' in the number of conversions following the election of Pope John Paul II and Pope Benedict XVI does not seem to have been repeated by Pope Francis. The numbers of receptions was elevated after St John Paul's election for several years, his visit in 1982 gave it another filip, and his generosity to Anglican refugees from the ordination of women in 1992 was an even bigger boost. The last years of his pontificate, on the other hand, were not so good. Pope Benedict's election, which was more closely followed by his visit, had a remarkable effect. Pope Francis does not appear to have had a similar effect.

All of this, of course, pales into insignificance compared to the calamitous decline of the 1960s, of fully 70%, and takes no account of lapsation rates which were sky high in that decade, and have been serious ever since. The number of Catholic marriages as a percentage of all marriages is not a bad measure of the Church's health, and it is not very healthy.

But let's stick to receptions, it gives an indication of how attractive the Church is to outsiders. What drove the figures up and down? The impact of the World Wars is pretty obvious, as is things like new papacies. The cause of the really big drop is not so obvious. I've put in the dates of Vatican II, but the graph peaked in 1959. The liberals all point to Humanae Vitae, but it is hard to see what this has got to do with it, it was issued when most of the damage had already been done.

The simplest explanation is that the Church is more attractive, let us say to the people who might actually convert, when her message is clear. The election of two conservative Popes, St John Paul II and Pope Benedict, had a positive impact: that is undeniable. So did their visits to the UK, in which their conservative message was made with particular visibility. Humanae Vitae and Bl Paul VI's other conservative, dogma-reaffirming documents like Mysterium Fidei (1965) and the Credo of the People of God (1968) may have had something to do with the bottoming-out of the decline in 1971, along with the degree of liturgical stability brought about by the Novus Ordo Missae in 1970. The sense that anything was possible, that nothing was out of bounds, that the Church might do any kind of doctrinal 'back-flip', which was prevalent in the 1960s before, during, and after the Council, was obviously the worst possible message to send to sincere seekers after truth considering converting.

If you are thinking of converting, you'll want to know what is going to be expected of you. If it is all in a state of flux, you are going to hesistate. That's just obvious. If the flux carries on for an entire decade, this hesitation is going to have a disastrous effect on the number of new members.

But there is something more: even after the steep decline was arrested in 1970s, the Church was about a third as attractive as it has been on the eve of the Council. One might think that the peak of the 1950s was unsustainable, but if we consider conversions in relation to the Catholic population, it was less impressive than the situation between the wars.

The fact is that the Church had a very successful first half of the 20th century, and switched into an entirely different gear, a much lower gear, after 1960.

But this too makes sense on the basis of an analysis in terms of simple clarity of teaching. The pre-Conciliar Church was famous for its clarity. The liberals thought this was terrible, but it was attractive: along with other aspects of Catholic life, such as the much more stringent discipline, on fasting, holy days of obligation, and the marriage rules; in addition there was the traditional liturgy. These added up to a Faith which was demanding, and gave one a taste of the Mysterium tremendum.

Are you surprised? Frankly, if the Church can't present herself as serious, demanding, and holy, we can hardly expect people to flock to join.