The Traditional Mass and children 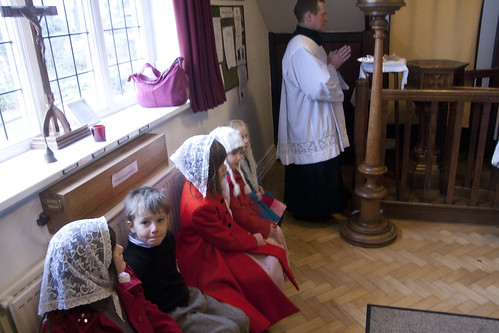 I'd like to draw attention to Peter Kwasniewski's post on the New Liturgical Movement blog about children at the Extraordinary Form, and add some comments of my own.

I've written a lot about non-verbal communication in the liturgy, and when it comes to children, with limited verbal skills, this is obviously of special importance. The reformed Mass is all about verbal communication: as much as possible is said aloud, there is less repetition within the Mass and less repetition from week to week. Children aren't the only ones to appreciate non-verbal communication, of course. In the immortal words of a working-class Catholic in Newcastle, interviewed by the sociologist Anthony Archer, on the New Mass: 'It’s just like a lecture, man. It goes on and on.' Not because it is actually longer, but because it comes across as a long stream of verbiage. Archer's argument is that the New Mass is appreciated most by intellectually-minded, educated, articulate, middle class Catholics.

One might add that it is often said that women are more oriented to verbal communication than men. It is also said that spoken, as opposed to written, words, are less easily taken in by modern people, an argument frequently made against the use of lectures in education today. Pope Paul VI remarked 'modern man is sated with words'. These observations, taken together, would explain a lot about the typical size and composition of the Novus Ordo congregation, but that would take me off the point. 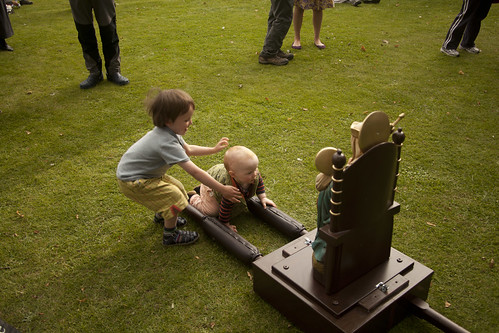 To stick to children, it is obvious that you have to do something more than just talk at them, and priests addressing children in the context of the Ordinary Form are often well aware of this. All sorts of things are attempted to add to the Mass elements of non-verbal communication which aren't otherwise there: children acting out the gospel story at school Masses, children's liturgies, children being herded into the sanctuary and so on. Generally speaking, these attempts have failed. The children still lapse, and in the meantime adults present are often curling their toes. There are several reasons for this failure.

The first is that, even while recognising the importance of having more than just words, the model of verbal communication in the liturgy is so ingrained in the liturgical culture of the Ordinary Form, that it is still regarded as of the utmost importance to get as much verbal stuff over to the children as possible. This means using words of one syllable, explaining every liturgical action with a twee commentary, having special 'Children's Eucharistic Prayers', and so on. The problem is that however dumbed down you make the Mass, there is just so much to comment on: the offertory, the lavabo, the institution narrative, the Communion of the Faithful: all quite distinct, all rich and complex, and all in quick succession. The result is that children are engulfed in verbiage, of which they will understand little and remember less. 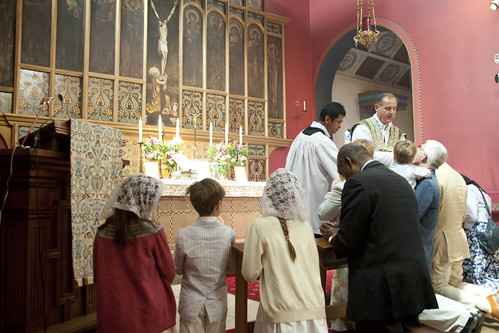 In the meantime, adults are subjected to the same patronising flow of words as the children, and older children become convinced that Mass is for babies.

The second aspect of the problem is the idea that children respond better to informality and spontaneity than to formality. Wherever this idea comes from, a few minutes' though should be enough to dispel it. Children are creatures of habit; education is all about repetition. Put those two uncontroversial thoughts together and you can see the value of a stable, ritualised liturgy, lacking in spontaneity. This really should be obvious. Will they understand it? Well, they have a better chance of coming to understand it than they will of something which is different every Sunday. You can use some of the plentiful teaching aids for the Traditional Mass to go through the whole thing step by step with children. This would be impossible with the Novus Ordo, because of all the options.

This brings us to a third problem, which is the kind of participation which is demanded of the congregation in the Ordinary Form. In the Vetus Ordo there may, or may not, be singing, and dialogue, and people standing up and sitting down again, but by contrast with the formality of the sanctuary, there is relatively little of this activity, and the faithful are free to do these things or not. What happens in the nave is, in fact, quite informal. There are local customs, but no binding rules. Not to kneel for the consecration would strike most people as strange, and you may annoy people behind you if you are blocking their view by standing when they are kneeling down, but no one is going to make you feel uncomfortable if you don't sing 'et cum spiritu tuo' on cue. In the New Mass, by contrast, as you go in you are handed lists of instructions for posture and verbal responses, some of the latter long and complicated, and if you don't do it right you can find yourself being ticked off. I've known some priests cut to the chase and pre-emptively tick off the whole congregation, by barking 'kneel' and 'stand' at intervals throughout Mass. 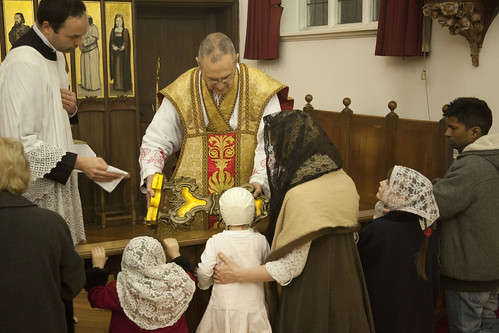 The grain of truth in the idea that children don't take well to formality is perhaps this: that if they don't know what they are supposed to be doing, then it is embarrassing for them: as for anyone. In a formal setting, then, they may feel uncomfortable because, lacking experience in these things, they may worry about putting a foot wrong. But it turns out that this isn't an argument against the EF; rather, it is a problem for the OF. Because it is in the OF that ordinary worshipers are expected to say and do the right thing at the right time; it is in the OF that one can feel embarrassed (as I have done) blurting out the wrong response because it has been changed, or not knowing the long 'suscipiat' response off by heart, whether in Latin, at a Latin Novus Ordo, or in English.

I leave readers with this thought. What genius thought that the Consecration would come across better, would strike a deeper chord in the onlooker, would get inside you and help to transform you more, if you remove the priest's genuflection before each elevation? The aim was presumably to make it less formal, slightly more like 'ordinary life', but this is silly: the Consecration is still a highly formal procedure, even in the simplest OF Mass. What the reformers succeeded in doing was taking away some of the drama, some of the visible symbolism, something which speaks in a universal language, a language instinctively understood by children. And this is what they did throughout the Mass: the abolition of the visible, gradual ascent up the Altar steps in the Preparatory Prayers, the proclamation of the Gospel facing north, the genuflection for the Incarnation in the Creed, the ringing of the bell before the consecration and at the Priest's Communion, the reception of Communion on the tongue, and the genuflection during the Last Gospel. All I can say is, whatever arguments may be put forward for these changes, they weren't helpful for children's engagement in the liturgy. 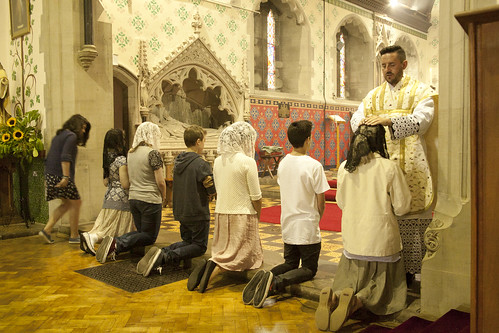 Relevant to this post is the FIUV Position Paper on Silence.

Support the work of the LMS by becoming an 'Anniversary Supporter'.
Posted by Joseph Shaw at 12:05 pm