The Man crisis according to the OECD 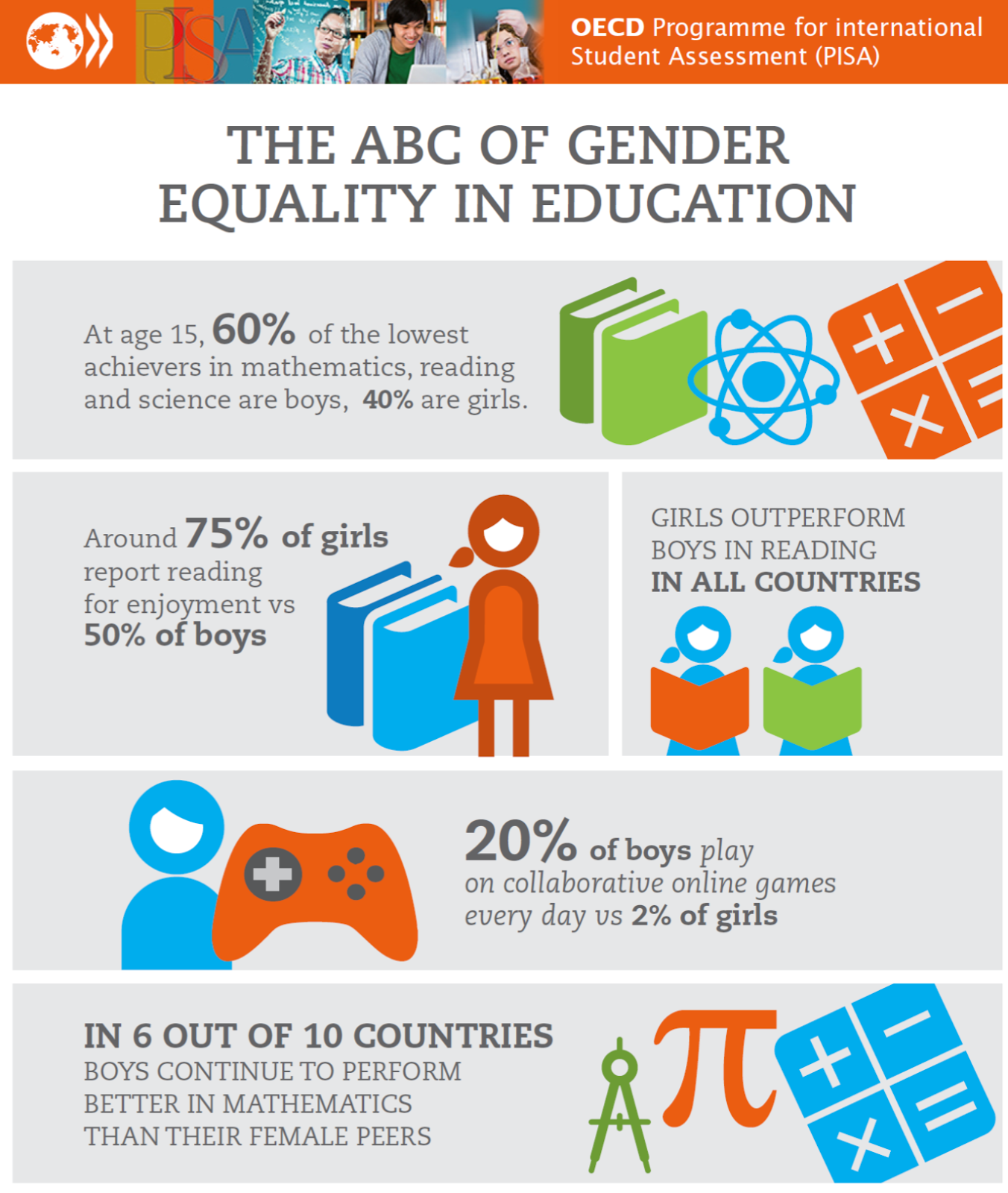 The Organisation of Economic Co-operation and Development (OECD) produced a report on 5th March on the relative performance of boys and girls in education. There has been a good deal of discussion on this over recent decades; this study gives a solid empirical basis for it to continue.

(Summarising article in The Economist; OECD page with links to the whole report and other materials.)

On the right is part of an 'infographic' presenting some of the key findings. Another finding, which some readers will find surprising, is that women now outnumber men at university across the whole world, and by a big proportion in rich countries. In North America, the proportion of women is astonishing, though the trend has leveled off in the last few years: see the graph below, put together by The Economist. 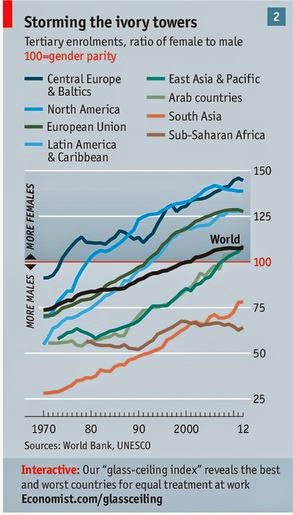 One reason I am interested in this is because I am interested in trends in the secular world which mirror trends in the Church. Another case is falling church attendance being paralleled by falling memberships in various secular membership organisations and clubs. I've done a long blog post about this here. Similarly, the loss of men from the Church appears has taken place in the context of, for example, the loss of men from universities. The is a crisis of men going on in society as a whole. Before jumping to conclusions about the implications for the Church, however, we need to understand the secular phenomenon.

What the OECD report says is that boys and men are leaving what we might call their traditional pattern in education, though elements of this old pattern are still visible. The traditional pattern is that they choose particularly difficult subjects which promise greater career pay-offs (the 'graduate pay premium'), and work hard at them. More men than women read subjects like engineering at university, though the difference is less than before, and after education, in their early career, men are (still) more inclined to put in the hours. These factors mean that men (still, not as much as before) earn more after a few years, despite being (now, unlike earlier) at an educational disadvantage, on average, when applying for jobs. However, we are now confronted with the phenomenon of young men going to university less than women, dropping out more when they get there, and boys disproportionately saying school is a waste of time: the OECD's survey says that they are twice as likely as girls to say that.

There are a number of factors which the report identifies. For example, boys do significantly better in tests at school when - wait for it - the test scripts are anonymised. So the overwhelmingly female teaching profession is actually sexist; this is statistically provable. There is also a wealth of anecdotal evidence for a general feminisation of the curriculum and school activities, which will also de-motitivates boys, and the same is true at university. However, this isn't the main factor, because it doesn't explain the traditional pattern, or what is happening to it.

Although The Economist and the OECD report itself appear afraid to say this, the explanation is pretty obvious. Why have boys and young men traditionally felt motivated to work their socks off doing hard subjects which will land them bigger salaries, and then carry on working their socks off in their early careers? No prizes for guessing, but you will search in vain for the word 'breadwinner' in the OECD report. If men no longer expect to be the breadwinner of something resembling a traditional family, they won't have the traditional incentive to put in all this work.

This has been called the 'man strike'; a psychiatrist, Dr Helen Smith, has written a book called Men on Strike, contributing to a burgeoning, if still not fully mainstream, literature on the subject. What Smith explains is that although most men still marry and have children, the lack of security and prestige in their position as primary breadwinner means that extra investment in hard work from boyhood to middle age can no longer be expected to give a good return in terms of domestic contentment. They are not always expected to be the primary earner, they are no longer as respected for being one, and then they have only have an even chance of their marriages not ending in divorce. No one seems to dispute that fathers are treated badly in divorce settlements and child custody, and earning more opens them up to an even greater degree of exploitation by the family courts. These incentives feed through, naturally, to the question of getting married itself. The number of people getting married is indeed on a long downward slope, and it is women, not men, who seem to be complaining about it. (I've blogged about how easy divorce leads to fewer marriages here.)

The Economist notes one difficulty the new situation presents for women:


[I]n the past they have typically married men in their own social group or above. If there are too few of those, many women will have to marry down or not at all.

Well, this is putting the problem mildly.

I'll say something about the implications for the Church in another post.