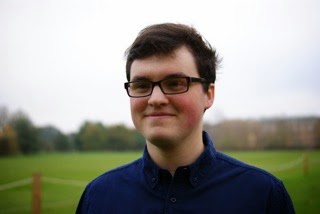 A Press Release from the LMS, which has supported this prize by allowing the winning piece to be performed at our Easter Triduum services in St Mary Moorfields in London.

----------
The winner of the 2015 inaugural Schellhorn Prize for Sacred Music Composition has been announced.

Young composer Marco Galvani wins a £500 prize and a world premiere during the Holy Week services at St Mary Moorfields Catholic Church in the City of London.

Marco, 20, from Prenton on the Wirral, is a second-year Music student at The Queen’s College, Oxford. His piece ‘Ecce Quam Bonum’, a short setting of the first verses of Psalm 133, will be performed on Holy Saturday.


Marco said: ‘Winning this prize means an awful lot to me. I put a lot into the piece, I pushed myself more than I had before and tried out more complex ideas.

‘I have been singing choral music for as long as I can remember, and it’s an amazing feeling to win a prize for a choral piece that I have composed myself. I’m very excited about having my piece performed in London.’

Classical pianist Matthew Schellhorn founded the prize in 2014 to foster artistic endeavor and encourage excellence in the Sacred Liturgy. Matthew said: ‘The competition is aimed at 18 to 26 year olds, which is the age when musicians need financial help and encouragement and some kind of infrastructure. It is hoped the prize will provide an incentive and build up a working relationship.

‘I was delighted to work with four leading practicing musicians in order to recommend a winner. Judging was a tough call because many of the entries displayed a high degree of compositional merit and sensitivity. Marco’s piece was outstanding, and further it is performable by a small group making it adaptable in the real world.’

In addition, the Trustees have given an honourable mention to three other entrants - Robert Busiakiewitz for Kyrie, Barnaby Martin for Gloria and Thomas Neal for Pange lingua.

Matthew added: ‘Encouraging people to write liturgical music helps to raise the standard of contemporary music in Catholic churches. Currently lots of brilliant liturgical music is commissioned but is performed in concert and not in the Sacred Liturgy. This prize helps re-establish the link between liturgical music and the Church.’

The Schellhorn Prize for Sacred Music Composition is supported by the Latin Mass Society of England and Wales. Chairman Joseph Shaw said: ‘I am delighted that the Latin Mass Society has taken part in this important initiative of the Schellhorn Trust to encourage young composers to tackle liturgical music. I congratulate Marco for his winning piece, which will be a worthy part of our Holy Week services in St Mary Moorfields, London, this year.’