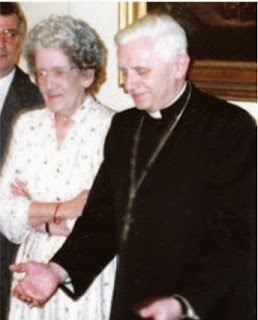 I never met Sue Coote, a long-standing member of cigarette-fuelled Latin Mass Society Committee of the 1970s and 1980s. It was only shortly after I started going to the Traditional Mass regularly, in 2002, that I heard it announced that she had died. She was clearly a remarkable lady, the driving force of the Latin Mass Society for many years as its Secretary.

Until we revised it a few years ago, the LMS Constitution's list of duties for the Secretary was longer than the lists for all the other offices combined. Oh that was for Sue Coote!, I was told.

I'm delighted that the Mass of Ages has an appreciation of her in the new issue; you can read it as a pdf here. The hard copy should be arriving in members' homes and parishes this week. She was a true mulier fortis, a valiant woman.