Worries about the Secular Critique of Islam 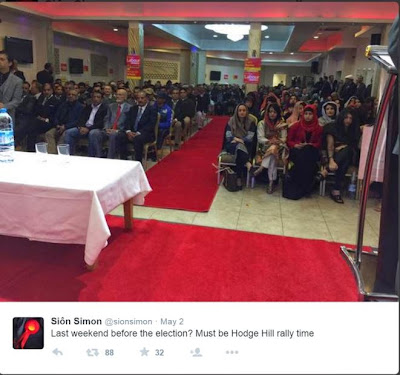 Once upon a time The Spectator was a conservative publication, but there is nothing socially conservative about what Kate Maltby had to say on its website about the Labour Rally in Hodge Hill, Birmingham, from which Labour MP Sion Simon tweeted this image.

There can be no excuse for requiring women to sit separately at an event at which they’re supposed to use their brains as engaged citizens, not as sex objects or as baby machines. True, orthodox branches of both Islam and Judaism require men and women to sit separately in their religious services – one reason why I’m not planning to convert to either any time soon – on the grounds that proximity to the opposite sex may distract worshippers from meditating on God. As yesterday’s rally wasn’t a religious service, I can only conclude that rather than meditating on God, the organizers were anxious that no sexual thrill should distract the watchers from meditating instead on the noble figure of Tom Watson.

Maltby's objection appears to be to (what she imagines to be) Islamic theology and culture.  But not only does she not like it, she thinks it is intolerable that anyone should disagree with her.

As I’ve written before, simply having the option of separate seating sends a message that anyone who doesn’t conform to traditional male and female roles is a problem.

Maltby may be right that the organisers - notably a Muslim Councillor, Ansar Ali Khan - regard the rejection of traditional gender roles as 'a problem'. Why, exactly, shouldn't they? Maltby seems to suggest that their position should not be tolerated: even the option of separate seating is wrong, political parties should not go near such events, they should be run out of town.

Catholic commentators jumping on this bandwagon should note that it is not only Jews and Muslims who have, historically, separated men and women in places of worship: Catholics did as well. The practice is commended, though not regarded as compulsory, in the 1917 Code of Canon Law - Canon 1262.1:

It is desirable that, consistent with ancient discipline, women be separated from men in church.

I have even seen this in practice, in country districts in Africa, though I don't think it has happened in Europe for a century. To say it is about 'distractions' is not quite right. It is an expression of female modesty and reserve, and male respect for that modesty and reserve. As such, it is particularly appropriate in church, but its extension to other contexts is perfectly comprehensible.

Islam, Judaism and Catholicism may be oppressive to women - that's for Maltby to argue - but for the life of me I can't understand why a practice of men and women sitting in separate parts of a place of worship, meeting hall, or indeed classroom or cinema is in itself oppressive to women. The separation applies to both sexes, for heavens' sake. This arrangement at a rally may, like the wearing of headscarves, be indicative of a serious-minded Islam which does other things to oppress women, but this is surely the wrong issue to pick a fight over.

Modern western society wants to deny women modesty and reserve. The fashion industry, sex education, feminist ideology, and peer pressure, conspire to strip women of their reserve, their sacredness. Muslim women, so many of whom are adopting veiling practices which go beyond what was commonly done by their immediate cultural predecessors, are reacting against this: if Maltby and her like imagine this is all imposed by men, they are living in a fantasy world. Is this cultural and spiritual response to modern conditions by Muslim women allowed? Is any rebellion by women against the cultural hegemony of a brutalised and exploited image of femininity permissible? It would seem not.

Maltby can read what she likes about the oppression of women in Islam into what happened in Birmingham, but I know what I read into her article: just another version of the liberal attempt to flatten out all cultural variation in the name of the one true ideology.

Regular readers know that I am a long, long way from endorsing any kind of politically correct, cringing, apology for Islam. I am not a Muslim and, ipso facto, I do not agree with Muslim theology. But we need to be careful about how we disagree with Islam. To repeat what I said in an earlier post, we need a Catholic critique of Islam. Buying into a secularist critique of Islam is, for Catholics, even more dangerous than buying into an Evangelical critique of Islam.

The other day, in France, a Muslim schoolgirl was sent home because she was wearing a skirt the authorities considered too long. If she had turned up looking like a prostitute, I suppose that would have been fine. Are we all quite sure that Islam is more oppressive to women than prostitution?

See my related posts about head coverings in church and the complementarity of the sexes.