Worries about the Evangelical response to Islam

Just as a failure of mainstream politics to deal with Islam has contributed to the issue feeding non-mainstream politics, so the failure of mainstream religion, including Catholicism, to address Islam publicly, consistently, and honestly, has led to it becoming an issue in which more marginal figures can make a name for themselves. If you want to hear a Christian analysis or critique of Islam, it's not long before you find yourself looking at people like David Wood over at 'Answering Muslims.'

Wood has a lot of very interesting things to say about Islam, because he has on his team Muslim converts to Christianity who are well informed about Islam; for a taster of his work, start from this page. (I'd be equally interested in an Islamic rebuttal of his arguments, of course.) He doen't come across as a nutter, although his aggressive polemic makes me a bit uncomfortable. He is, however, an Evangelical. I think it is very tempting for conservative and traditionally-minded Catholics to take their cue from Evangelicals, who seem terribly well-organised, vigorous, and effective, so I think it is important to point out the problem.

The problem, in a nutshell, is that at least some of the arguments presented on Wood's website against Islam don't work, because they are based on Evangelical theology. In fact, he ends up criticising Muslims for what they get right: things they have in common with Catholics. Here are a few examples.


1. Wood criticises Islam for 'pagan' practices such as, the pilgrimage, the kissing of the 'black stone', and rituals connected with the hajj (the Islamic pilgrimage to Mecca). Now it is true that these practices are connected with pre-Islamic Arab religion, and it might be argued that Islamic propagandists are inconsistent in condemning pagan practices while excusing these, but Wood's beef seems to be that the concept of a holy place is intrinsically wrong. But it isn't: the Temple was consecrated as a holy place in the Old Testament, and people went on pilgrimage there, just as Catholics do to this day. Criticise Islam if you like, but not for that.

2. Wood points out the elaborate ritual involved in Islamic prayer. I must say, watching the video made by Muslims about ritual washing before prayer, which Wood embeds in his post, was an eye-opener for me: it really is rather complicated! Leaving aside the questions of whether this kind of thing is really obligatory, to whom, and how often, Wood seems to regard it as obvious that there is a problem with ceremony, ritual, and even formal prayer. Well, sorry, but there isn't: again, just take a look at the Old Testament, if you don't want to take the Christian tradition seriously.

3. In a video presented on Wood's site, Steven Crowder and a friendly interviewee express shock and disbelief that Mohammed's wife Aisha, who was 18 and childless when she was widowed, was not allowed (by order of Mohammed), to marry again. Because after all, they exclaim, even Mary the mother of Jesus went on to have normal sexual relations after Jesus was born and to have several more children. This argument just left me feeling weak. (See the linked video from 7m 50 seconds.)

4. Wood's collaborator Rachid, a convert to and from Islam (starting off and ending up in some kind of evangelical Christian group), explains his journey in a long video interview. It is fascinating, but as he explains it one of the key reasons for his leaving Islam was his lack of a feeling of confidence that he would be saved: the 'assurance' that Evangelicals like to talk about. Again, Wood talks about Mohammed's own lack of 'assurance of salvation', shock horror, here. Well sorry, buddies, we can't sure of our salvation until we die, and if you think you are sure of it then you are in trouble. 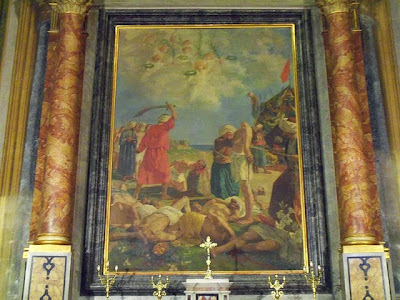 In some ways Islam is closer to Protestantism than to Catholicism. It is not an incarnational or sacramental religion; it rejects the use of images, and is quick to condemn other religions for idolatry; it stresses an unmediated relationship with God, and its Holy Book. Perhaps that makes it look more attractive to the disaffected black men from a low-church Christian backgrounds who form such a striking proportion of its converts in the USA and elsewhere. And Wood may be quite sensible, from this point of view, to stress the aspects of Islam which don't measure up to Protestant principles, for the benefit of this same vulnerable demographic. But it would be very dangerous for Catholics to draw their inspiration from such arguments, and in any case it is never a good idea to rely on arguments which are false.

We need a critique of Islam of our own.