On Wednesday 27th May,
the Ember Wedesday of Pentecost,
Cardinal Burke will celebrate Low Mass
in the Extraordinary Form - Pontifical Low Mass -
in SS Gregory & Augustine in Oxford, at 8am.

Please come along if you can. I'm told he is going to preach. There will be polyphonic motets during Mass. Low Mass celebrated with solemnity by a Cardinal is an impressive - and an unusual - liturgy, and well worth making the effort to see. Here is a set of photographs showing Cardinal Castrillon Hoyos celebrating Low Mass for the FIUV in St Peter's a few years ago. 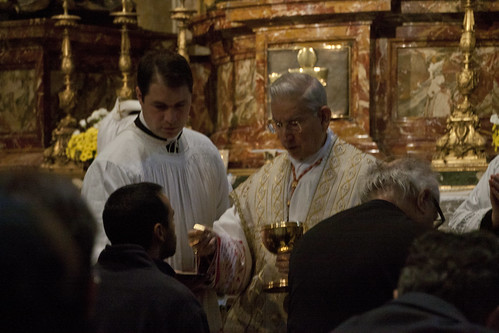 Later in the same day, His Eminence will be officiating at (traditional) Vespers at the Oxford Oratory at 4pm, and giving a lecture in the Chaplaincy at 6pm, on the intellectual legacy of the reign of Benedict XVI.

On Tuesday 26th, he will be celebrating an Ordinary Form Mass in the Oxford Oratory for the feast of St Philip Neri, at 6pm.

Support the work of the LMS by becoming an 'Anniversary Supporter'.
Posted by Joseph Shaw at 1:31 pm