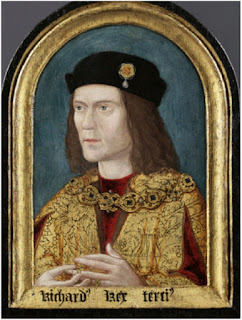 This is the day before the 530th anniversary of his death in 1485; the actual anniversary, 22nd, is Feast of the Immaculate Heart of Mary, on which a Requiem would be impossible.

He died in the nearby Battle of Bosworth, and was interred in the former Greyfriars (Franciscan) church in the town. He has now been reburied in the Anglican Cathedral.

It isn't difficult to imagine what he would have made of that. He assisted his brother, King Edward IV, in his enthusiastic persecution of the proto-Protestant Lollards, and founded Chantries (for Masses to be said for the dead) on a grand scale. He had plans for a massive chantry in York Minster with 6 altars, to be served by 100 priests. This may have been inspired by a guilty conscience, but it was all the more sincere for that.

The Dominican Rite of Mass is close to the Sarum Rite Masses with which he would have been most familiar. The Roman Rite, of course, would also have been known to him; the version of it used by the Fransiscans all over the world, printed first in 1470 (the Missale Romano-Seraphicum), is substantially the same as that used in the Traditional Roman Rite of today.