The speaker at the Latin Mass Society's Annual General Meeting will be Archbishop Thomas Gullickson, Nuncio to Switzerland and former Nuncio to the Ukraine.

The evening before the AGM, Friday 8th July, he will be officiating at Vespers in St Mary Magdalen's, Wandsworth, at 5:30pm.

Saturday's feast, of SS Thomas More and John Fisher, is of such importance that this Vespers will be the 'first Vespers' of it. Vespers will be offered, however, for the repose of the soul of Evelyn Waugh, who's 60th anniversary is this year. Waugh was invited to be the first President of the Latin Mass Society, but decline; he was to die the year after the Society was established. Until his death he was the acknowlegded lay leader of the movement for the preservation of the ancient Catholic liturgy, and we owe him a great deal. 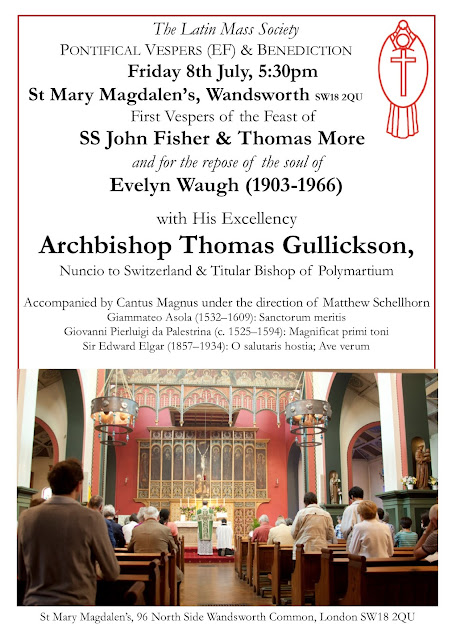