Church statistics: what happened to the young men?

In my last post I noted that the figures for lapsation from the Church given by Stephen Bullivant, which originated with the British Attitudes Survey, are systematically distorted by attitudes to Church membership and motives for getting babied baptised, which themselves vary over time and between regions. The inclusion of people in the category of 'self-identified Catholic' who have only a nominal or tribal affiliation increases the number of 'Catholics', but not the number of church-goers. If they felt that they shouldn't call themselves Catholics, the rate of practice would increase without any increase in the numbers of bums on pews. For this reason, I think that saying that 39.2% of 'Catholics' never or practically never go to Church is pretty meaningless. 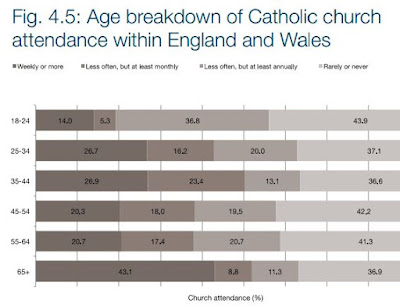 More helpful is the analysis of church-goers. The age profile is one interesting thing. The small number of the youngest group, and the large number of the oldest group, is perhaps not surprising. What is a little odd is that of the four remaining age-segments, the younger two practice more than the older two. This graph is still about proportions of self-identified Catholics, but this trend is reflected in the graph (below) which zeroes in on weekly-or-more attenders. What is going on?

People who were 65 or more in 2014 (the vintage of the data) were 21 or more in 1970. The next two younger age groups were young adults or children at the time of the liturgical reform. Once we get back to people of 34 or younger, we are dealing with people who didn't experience the reform at first hand at all: they hadn't been born. Bearing in mind the liturgical and catechetical anarchy of the period between about 1965 and 1978 (the election of Pope John Paul II), I don't think it is very surprising that people who experienced this as children or very young adults were traumatised. These statistics, at any rate, show that the 'springtime of Vatican II' did nothing to draw more people into to the practice of the Faith.

Even more intriguing are the figures for sexes. I've written a lot on this blog about the lack of men in our churches, but I've been quoting statistics from the USA. Here we can see exactly what the situation is here in England and Wales.

Before anything else, we can be confident that Catholic families, on average, have as many boys as girls. If there are differences between the number of men and women among adult Catholics, it is because there is a differential lapsation rate, and to a smaller extent perhaps a different rate of conversion. (Converts account for 8% of self-described Catholics.)

First, we find that more women than men identify as Catholic: of those who call themselves Catholic, 40.9% are men and 59.1% are women. 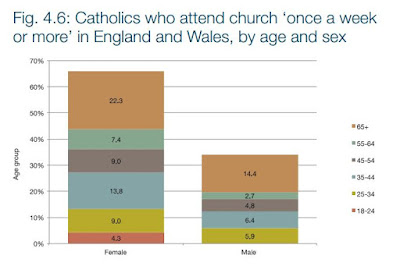 Third, looking at who is actually at Mass on a weekly or more basis, fully two thirds are women, and one third are men.

Finally, look at this
graph of the sex ratio of weekly-or-more attenders, which is also broken down by age. Notice something odd about it? Not only is it skewed towards women, whose column is twice the size of men; not only does it demonstrate the large number of older women in our congregation: women over 65 make up a quarter of the typical congregation. But something else. The bottom category of the male column is missing. What happened to men aged 18-24?

The BSA survey is based on responses from 3,000 people; half of them actually took part in the survey. In this impressive sample, they found no men aged 18 to 25 who went to Catholic church once a week or more. Not one. Their set of men at that age going to church every week is empty.

Don't imagine that lots of young men are going to church slightly less frequently: as the first table above shows, whereas 14% of nominal Catholics aged 18-24 go to church weekly (presumably, these are females), only 5.3% go 'at least monthly', and if that number includes men, there aren't many of them. Obviously there are some young Catholic men who go to church. But they are statistically negligable.

At this point I need to refer back to the Position Paper I published about the Traditional Mass and men, and to my other discussions of related issues. It is demonstrable that men are turned off the liturgy and general atmosphere of the Church, but come in large numbers to the Traditional Mass and traditional devotions; traditional Catholic congregations, again, are astonishingly fertile in terms of vocations to the priesthood, and harbour large numbers of children. Come to the Chartres Pilgrimage, and you will realise that suggestions that men are simply less religious than women, or that Catholicism is intrinsically feminine, are just nonsense. It is the way the Faith is presented to young men which is the problem.

Our parishes and schools are failing Catholic boys.
Support the work of the LMS by becoming an 'Anniversary Supporter'.
Posted by Joseph Shaw at 10:00 am