Stephen Bullivant of the Benedict XVI Centre for Religion and Society has produced a study based on the British Social Attitudes Survey, focusing on the Catholic Church in England and Wales.

It is marred by some typographical errors, for example referring back to the wrong diagramme at one point, and saying 'somewhat under two in five [cradle Catholics] attends religious services once a week or more' (p14) when the figure is 17.1%. Thelittle video they've produced to go with it fails to explain what the percentages they are quoting are percentages of.

A general methodological point is we get individuals' views of whether they are Catholic, Anglican, or whatever, rather than any objective judgment based on belief and practice. An interesting result of this comes out with Baptists. For some reason Baptists are much less likely than Catholics and Methodists to say that they are Baptists if they aren't practicing. This means that the lapsation rate for Baptists is the highest of the groups identified: only 28.9% of cradle Baptists identify as Baptists. Conversly, the percentage of nominal Baptists who practice is also high: 58% go to church at least weekly, another 6% at least monthly. We've all met people who think of themselves as Anglicans, by contrast, even if their family has hardly set foot in church for generations. Accordingly, 51.7% of cradle Anglicans identify as Anglicans, but only 8.9% of self-identified Anglicans actually get themselves to a service once a week, with another 10% going at least once a month. 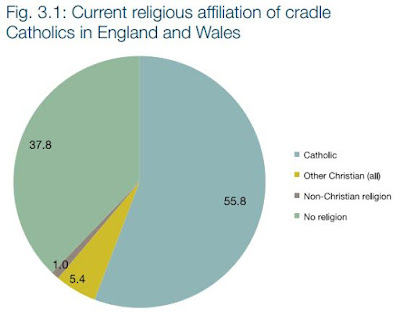 What this means--and this is something Bullivant appears not to have noticed--is that these figures are hugely influenced by attitudes to church membership: what people think it means to be an Anglican or a Baptist. The reality of how Baptists and Anglicans compare at retaining their young people is obscured by this. If Baptists suddenly decided that having a vague tribal loyalty to the Baptist milieu was enough for them to identity as Baptist, then their retention rate would shoot up and their rate of practicing would plummet. But these changes wouldn't reflect any changes in either belief or practice - except beliefs about church membership.

The trouble is, these figures are still affected by attitudes to church membership, just at one remove. What does it mean to be a 'cradle Catholic'? Baptism? Well, what does it take to get a couple to have their child baptised, and what does it take for a priest to carry out the baptism? The number of cradle Catholics who go on to lapse include those who were themselves brought up as only nomically Catholic. Children who go to a Catholic school on the basis of parents' wholly theoretical affiliation to the Church will often, presumably, say they were cradle Catholics: they were, at any rate, baptised, and probably confirmed. But you can hardly be said to lapse from the practice of the Faith if you never practiced in the first place. 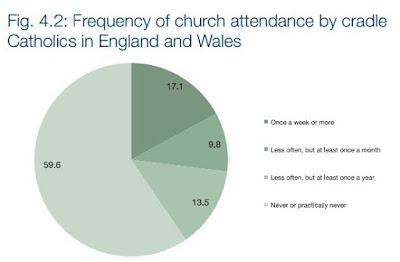 Consider the debate about whether the babies of lapsed Catholics should be baptised. Parents (or godparents) have to say that the child will be brought up in the Faith. For a priest to baptise a child solely because his parents want him to go to a good school, or to please granny, is sacrilege. But how are priests to determine the good will of parents? Naturally, a range of pastoral responses are possible, and there is variation by region and over time. These variations are going to feed through into the figures for lapsation twenty years later. Laxer policies will lead to higher lapsation rates; a region of the country or period of time characterised by a stricter policy will have a lower lapsation rate. That isn't to say that a laxer policy is a bad thing: personally I agree with the Pope that priests must take parental professions of their intentions at face value, unless there are strong reasons not to do so. More nominal Catholics may, if carefully handled, lead to more real Catholics. My point is simply that the lapsation figures are being distorted by factors which have got nothing to do with how effective catechesis is, how attractive the liturgy, the social standing of the Church, and so on: the things which we may have thought we were measuring when measuring the rate of lapsation.

The baptism of children to get them into Catholic schools (or to please granny) is no marginal phenomenon in the Church in England and Wales, but of course it is impossible to estimate an accurate figure for it. What we do know is that it artificially inflates the number of nominal Catholics and the lapsation rate alike. What we really need are figures for those brought up as practicing their religion (at least, going to church), who continue to practice as adults. For this we'd need to a new study.

We do get some hints about this, however, from Bullivant's figures, and tomorrow I will address them, by looking at age and gender profiles of practicing Catholics.