A few fallacies of the opponents of the Correctio 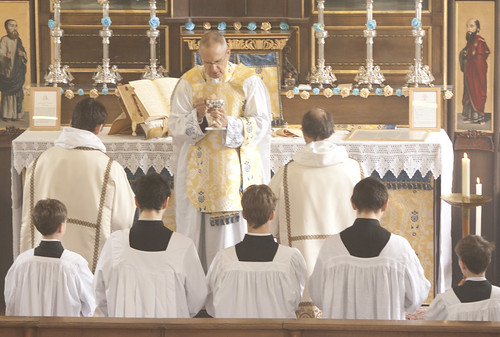 The other day I had a long exchange on Twitter with Stephen Walford, which was a frustrating experience, so I thought I'd set out in more detail a few of the things he and others don't get about the Correctio Filialis.

As I've noted before, Walford and others like say that Pope Francis has not changed doctrine, only practice. But with the same breath Walford appeals to Pope Francis' magisterial authority, and Catholics' obligations to believe, assent to, what he teaches, as applying to the new practice.

This suggests an incapacity to distinguish correctly between dogmatic and disciplinary acts. When I pointed out that 'assent' is something which only has relevance in relation to propositions, as opposed to commands (or questions, etc.), he still failed to see what difference it made.

It makes this difference: while Popes have the grace of office ('divine assistance') to help them make good disciplinary decisions (Walford gave the example of Pope St Pius X moving the age for First Communion), these are in a completely different category from dogmatic statements. They are assessed in relation to prudence; we don't ask if they are contained in the Deposit of Faith. That is why practice, including liturgy, can vary a fair amount from place to place and from time to time, whereas the Faith cannot. This is so even though what I mean by 'prudence' will take account of tradition and dogma, where these are relevant.

Walford needs the distinction, because he wants to say that giving Communion to public sinners is a 'practice', not a dogma. But having climbed up by it he kicks it away, claiming for a practice what is only available for a dogma: an obligation to assent. New practices may oblige us in some ways, obviously: we are now obliged to abstain from meat on Fridays in England and Wales, and weren't before 2009. Other disciplinary changes may apply to us without bringing in any obligations, such as Pius X's ruling on the earliest date for First Holy Communion. But while we should have respect for the bishops, councils, and Popes who make disciplinary decisions, and abide by them where applicable, there is absolutely no reason for us not to criticise them, or campaign for them to be changed. The present discipline on the Eucharistic Fast, for example, is ludicrous, and I and others have urged a change to it - while, obviously, observing it in the meantime. There is nothing disobedient about that.

If what is going on with Communion for the divorced and remarried were a matter of disciplinary change, we would expect a clear, legally effective statement to that effect from the Holy See, since the present discipline is a matter of law. We have seen nothing of the kind, and the Code of Canon Law still strictly prohibits the practice which, as far as it is possible to see, the Bishops of Buenos Aires and Malta want to apply. (I've just checked: yep, Canon 915 is still there.)

First, if Walford is correct that the change at issue is disciplinary not dogmatic, the Pope does not need the Ordinary Magisterium. The Magisterium does not come into it. Disciplinary matters are laid out by reference to disciplinary / legislative authority, not teaching / magisterial authority. The Pope's authority to make disciplinary changes are in fact limited by law: though he can change the law, he must make the changes he wants to make through the law. If he refuses to change Canon 915, for example, priests are still bound by it however much he may, non-legislativly, tell them to act contrary to it. To obey the Supreme Legislator, the Pope, they must obey Canon 915.

Secondly, the Ordinary Magisterium, like the Extraordinary Magisterium, does not exist to change doctrine. Walford points out that it happens that Catholics become obliged to believe certain things, such as the Assumption, only when they are dogmatically defined. This is true, but they already believed things which implied the apparently new doctrine. Christ gave the Church the Deposit of Faith, and everything binding about the Faith is contained in that.

Since we don't (indeed, can't) articulate to ourselves and then believe all the things which are implied by our existing beliefs, we can discover new things to believe which aren't exactly new, but implicit in our existing beliefs. I might not realise, for example, that 317 is a prime number, but its being a prime number is a logical consequence of other things I do believe. In the case of doctrine, it becomes an obligation to believe those implications of the Deposit of Faith which are drawn out authoritatively, from the Deposit of Faith, by the Church, by the Ordinary or Extraordinary Magisterium.

The Ordinary Magisterium can draw these things out without a General Council or an Ex Cathedra statement by the Pope. But for it to make sense to say that something has been taught by the Ordinary Magisterium, it has to be part of the Deposit of Faith. As Cardinal Pell said, you can't have 'doctrinal backflips'. That would suggest that the Deposit of Faith had changed. Or that the Truth was a liar.

Walford also claimed that you can't use the content of purportedly authoritative doctrinal statements as part of the process of working out whether Catholics are obliged to believe them. Presumably, he imagines that only the outward form of pronouncements is important. It is strange indeed that we are having this discussion, because the present issue has arisen in the form is has precisely because Pope Francis has declined to use recognised, authoritative forms to make the assertions which he apparently wants us to accept, if his endorsement of the Maltese and Buenos Aires guidelines, for example, is to be believed. Walford should postpone his championing of the outward form of dogamatic pronouncements until the time when he has some to show us.

Rather than go on about that, therefore, I will simply repeat that the Ordinary Magisterium is what the Church has always taught. An infallible use of the Ordinary Magisterium takes place when a Pope or Council reiterates what the Church has always taught, when, for example, it has been contradicted. It is not a tool to remake doctrine, and it cannot contradict itself. Popes cannot bind their successors in terms of discipline and law, but popes are certainly bound by their predecessors, and by the Doctors and Fathers, in terms of interpreting the Deposit of Faith. These are all, clearly, matters of the content of dogmatic statements.

Another issue is raised by Austen Ivereigh. Ivereigh likes to point out that not all the divorced and remarried are necessarily in a state of mortal sin, and that for this reason Pope St John Paul II allowed such as are living as 'brother and sister' to receive Communion. This is true, and opponents of the kind of practice advocated by the bishops of Malta and Buenos Aires should avoid saying either that all divorced and remarried Catholics are barred from Communion, or that priests should refuse Communion to those the priest judges to be in a state of mortal sin.

The discipline of the Church is different. Canon 915 says that those

'obstinately persevering in manifest grave sin are not to be admitted to holy communion.'

Those not known to be obstinately persevering in grave sin - i.e. those not doing so 'manifestly' - are not to be refused Communion. The discipline is helpful to public - manifest - grave sinners, and is fitting in terms of the nature of the Blessed Sacrament, because it prevents a sacrilege. But the reason they are refused and others are not is because of scandal to the congregation.

Ivereigh's suggestion is that what has changed a little in how divorced and remarried couples are treated (e.g. not insisting they live separately) could change some more. But although the argument of scandal may seem weak to modern eyes, it goes back to the discipline of the early Church and the words of St Paul. Here is the Pontifical Council for Legislative Texts, in the year 2000.

1. The prohibition found in the cited canon [915], by its nature, is derived from divine law and transcends the domain of positive ecclesiastical laws: the latter cannot introduce legislative changes which would oppose the doctrine of the Church. The scriptural text on which the ecclesial tradition has always relied is that of St. Paul: "This means that whoever eats the bread or drinks the cup of the Lord unworthily sins against the body and blood of the Lord. A man should examine himself first only then should he eat of the bread and drink of the cup. He who eats and drinks without recognizing the body eats and drinks a judgment on himself."