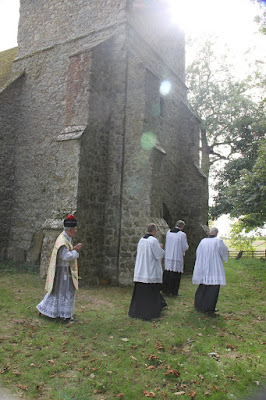 History was made in Kent when the Catholic Mass returned to a medieval church on Romney Marsh for only the third time since the Reformation.

On 23rd September the beautiful sound of Gregorian Chant could be heard across the Kent marshes as St Augustine’s in Snave hosted a Traditional Latin Mass.

Organised by the Latin Mass Society of England and Wales, this historic event attracted people from far and wide. Not for so many years has this little country church seen its pews packed full of Catholic worshippers.

Local Kent resident Marygold Turner from the Latin Mass Society who organised this popular event said “We are so very grateful to the Marshes Trust for allowing us to hold this wonderful Mass. It was very moving and the music was exceptional.”

Snave is one of a group of medieval churches built to serve very small communities on Romney Marsh in Kent. St Augustine’s, now redundant, is in the care of the Romney Marsh Historic Churches Trust.

Peter Anwyl-Harris, Chairman of the Trust, speaking after the Mass, thanked those involved with organising the event and extended an invitation to the Latin Mass Society to return to Snave next year.

The Latin Mass was celebrated by Mgr Anthony Conlon and the superb music which included Missa Trahe Me Post Te by the Renaissance composer Tomas Luis de Victoria was sung by local professional group The Victoria Consort.

The Latin Mass Society return to Kent on Saturday 7th October with a Pilgrimage to the ancient Carmelite priory at Aylesford.