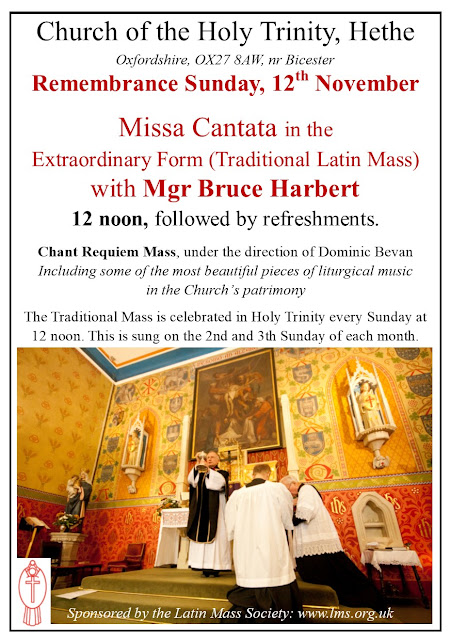 Remembrance Sunday, 12th November, is coming up in the UK: the Sunday nearest to the 11th of November, the date the First World War ended, when by longstanding permission priests in England and Wales are allowed to celebrate a Requiem Mass for our war dead.

There will be truly worthy sung celebrations of the ancient Mass for the Dead in the Birmingham Oratory, and in St William of York, Reading, with the Fraternity of St Peter.

Those locations are about 100 miles apart, or a two hour drive. Between them, the only place where you will find a Sung, Vetus Ordo Requiem Mass on Sunday will be in Holy Trinity, Hethe, at 12 noon (click for a map).

This is the oldest Catholic parish church in Oxfordshire, noted for the beauty of its decorations. Mass will be celebrated by Mgr Bruce Harbert, the well-known liturgical scholar, and the singing will be led by Dominic Bevan.

Please join us to pray for the war dead, some of whom are buried in the graveyard next to this church.

Support the work of the LMS by becoming an 'Anniversary Supporter'.
Posted by Joseph Shaw at 6:00 pm