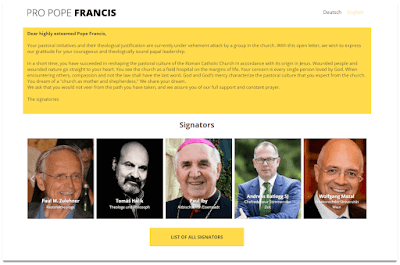 A German-based petition praising Pope Francis has been launched, signed by a handful of bishops and about 100 theologians and others.

The text of the petition itself is vague: it simply expresses support for Pope Francis' ‘initiatives’ and ‘leadership’. It is interesting, therefore, that despite appearing first on the website of the German Bishops’ Conference — which suggests some kind of official endorsement — so few German bishops have added their names. Indeed, the episcopal signatories one does find are either retired or are auxiliary bishops. It adds to the sense that even quite liberal bishops, who have dioceses to consider, are a bit concerned about the crisis, and are wary of simply throwing themselves into battle on the liberalising side. Every now and then a bishop makes a statement of enthusiasm for a liberal interpretation of Amoris laetitia — the other day it was Cardinal Barbarin’s turn — but these remain very much the exception, not the rule.

The signatories are, indeed, obscure and marginal figures. Cynics might say: just like the signatories of the Filial Correction. If so, this is a remarkably poor showing for something supported by the German Bishops’ Conference machinery, ostensibly in support of the Pope. It is obvious what limits the ability of the organisers of the Filial Correction to get big names: the very real danger of losing one's job. What is their excuse? Where are all those hundreds of theology professors in Church-supported institutions? Is it too much to ask them simply to ‘support the Pope’?

Instead we find figures who are notorious for their dissent against Papal teaching, who presumably look at Pope Francis’ pontificate a purely tactical light. This isn’t an upsurge of Ultramontanism; as soon as there’s another pope they’ll be back to demanding an independent Church in Germany, as they did under Pope Benedict.

One of the signatories has actually been excommunicated, and by Pope Francis himself, as recently as 2014. As 1Peter5 notes:

Martha Heizer — the President of the Austrian grass-root organization “We Are Church” (Wir sind Kirche) — was excommunicated by Pope Francis in May of 2014 for having, together with her husband, “celebrated” repeatedly Holy Mass in their private home and in the presence of guests.

This makes a mockery of the criticism of the Filial Correction for being signed by Bishop Fellay, Superior of the SSPX. Bishop Fellay's big crime, in canonical terms, was being consecrated bishop without the mandate of the Holy See, back in 1988, for which the penalty is excommunication. But Pope Benedict lifted that excommunication in 2009. Fellay and Heizer are clearly moving in very different directions, vis-a-vis canonical regularity.

We should, of course, support the Pope. I commend to readers the prayer recommended by the Bishops of England and Wales, in the official book of authorised devotions, the Manual of Prayers, last revised in 1953. In England and Wales it can be added to the Prayers After Low Mass in celebrations of the Extraordinary Form. (I have added the current Pope’s name, obviously.)

For the Sovereign Pontiff

V. Let us pray for our holy Father the Pope.

R. The Lord preserve him, and give him life, and make him blessed upon earth, and deliver him not up to the will of his enemies.

Let us pray.
O Almighty and eternal God, have mercy on thy servant Francis, our Pope, and direct him according to thy clemency into the way of everlasting salvation; that he may desire by thy grace those things which are pleasing to thee, and perform them with all his strength. Through Christ our Lord.

Support the work of the LMS by becoming an 'Anniversary Supporter'.
Posted by Joseph Shaw at 12:53 pm