The Correctio on social media: some links 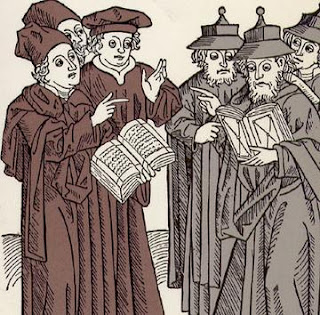 Please note that academics and pastors who wish to are invited to apply to join the official list of signatories through a button on the website here (scroll down).

This is an update on the post I did on the media response to the Filial Correction, in which I noted how the secular, mainstream press picked up the story from the embargo deadline - actually, a bit before the deadline...

So here's my handy guide to the Catholic media debate on the Correction.

Stephen 'liars and hypocrites' Walford criticised the Correction in the National Catholic Reporter, on the basis of his habitual confusion between the categories of the disciplinary and dogmatic; I responded on LifeSiteNews, and after some Twitter debate, some more here.

Mgr Mariano Fazio, Opus Dei's Vicar General (effectively the 2nd in command) criticised it in an interview with a French newspaper on the grounds that it was disloyal to the Pope; I responded on LifeSiteNews.

The US-based theologian Massimo Faggioli criticised the Correction as part of a wider Traditionist campaign against Vatican II in International La Croix, following this up with a stream of tweets like this one:

This led to a storm of criticism on Twitter, and it appears Faggioli deleted that particular tweet. Basing himself on the ones which were left, the non-signatory blogging monk, Fr Hugh Somerville-Knapman, published an excellent response on the hermeneutic of rupture.

Dr Fastiggi and Dawn Eden Goldstein used an issue of translation of Amoris to undermine part of the argument of the Correction in Vatican Insider; Chris Ferrara responded very fully in The Remnant, and Dr Christian Brugger replid them in LifeSiteNews, leading to a second round of discussion here.

The same two again took took to Vatican Insider to criticise it by reference to the rules for dissident theologians contained in the Instruction Donum veritatis; I responded here and on Rorate Caeli. They replied in my combox and I have replied to that here.

The general question of whether theologians and others are allowed to express their concerns publicly is addressed in magisterial detail by the signatory, theologian Michael Sirilla, on One Peter Five, and in more general terms by the canonist Edward Peters.

Rocco Butiglione criticised the Correctio, also in Vatican Insider on the grounds that Amoris can be interepreted in line with the preceding teaching of the Church. The canonist Edward Peters, while 'neutral' on the Filial Correction itself, pointed out multiple errors in Buttiglione's understanding of relevant Canon law here. Another response, by the distinguished theologian and signatory Claudio Pierantoni, is in the works.

In the meantime support for the initiative has come from the Oxford academic Fr Andrew Pinsent, who explained why he signed the Correction to the Catholic Herald, along with the retired American Bishop Gracida.

Fr Ray Blake (1, 2, 3) and Fr John Hunwicke (1, 2, 3) each produced a series of posts supporting the Correction, notably on the climate of fear in the Church which is preventing many priests and others from adding their names (Fr Hunwicke is a signatory, Fr Blake is not).

Another message of support comes from John Smeaton, the Director of SPUC, the British pro-life group, on the Voice of the Family. Smeaton connects the issues we raise with wider ones about the moral teaching of the Church, as discussed by Prof Joseph Seifert. Seifert's views have cost him his job, and this and the general issues are discussed by his friend Prof Robert Spaeman.

It is interesting to note that neiether Seifert nor Spaemann are signatories, despite their published views being close, if not identical, to those of the Correction. The same is true of Profs John Finnis and Germaine Grisez, whose detailed and powerful open letter to Pope Francis caused a stir year ago. Critics of the Correction who make much of the relative lack of 'big names' among the signatories have drawn the wrong conclusion. Really big names don't need the Correction: they can make an international splash with their concerns about Amoris on their own, and many have. Among the published opponents of the Correction, only Rocco Buttiglione comes close in terms of reputation to any one of these four men.

In addition the contributions I have picked out, there has been a torrent of other supportive articles and posts on One Peter Five, Rorate Caeli, LifeSiteNews, and by Fr Hunwicke, narturally on this blog, and of course elsewhere.

The discussion has not been taking place solely in English, however. The Bologna professor and priest Don Alberto Strumia, a signatory to the Correction, gave an interview in its defence on September 30th in the Italian daily, Il Giornale, for example.

The German website Katholisches.info carries an article by the Italian historian and signatory, Robert de Mattei, in German.

In Latin America, it made an episode of the conservative Catholic 'Coffee with Galat' discussion programme, as it has in North America with EWTN.

I have spoken to or given email interiews with journalists in Hungary and Poland.

Support the work of the LMS by becoming an 'Anniversary Supporter'.
Posted by Joseph Shaw at 6:03 pm