Book review: History of the FIUV by Leo Darroch 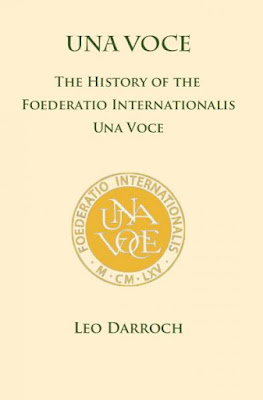 This review is in the current edition of the Latin Mass Society's magazine Mass of Ages. Cross posted from Rorate Caeli.

Leo Darroch has produced a substantial and fascinating volume on the FIUV, commonly known as Una Voce International, from its beginnings up to the end of the presidency of the late Michael Davies. Davies’ predecessor, Eric de Savanthem, was President for 30 years, from the early days of the organisation, so the book revolves around these two remarkable men.

Because of the nature of the material, the book is episodic in character. Some of these episodes are very revealing about the state of the Church at the time they took place, so I will devote this review to three of them.

The first is the interview and associated correspondence which took place between de Saventham and Archbishop (later, Cardinal) Giovanni Benelli, then Prefect of the Congregation for Divine Worship, in 1976 (pp127ff). De Saventham summarised Benelli’s position in a letter to him following the meeting:


Your Excellency has urged us to espouse as a matter of conscience the new forms of the Church’s public cult... Although the character of irreformability only attaches to definitions, promulgated ex cathedra in matters of faith and morals, [you asserted that] the assent due to the acts of the Sovereign Pontiff ought equally to express itself in humble obedience to those of his acts which merely concern the discipline or other nondoctrinal aspects of the government of the Church. For there also, you said, it is the same one and indivisible charisma which guarantees that all these acts cannot but be ordered towards the true and certain good of the Church. Consequently, you could only consider as reckless and irreconcilable with a proper ecclesiology all demands or initiatives which implied that the utility of such and such an act of government duly promulgated by the reigning Pontiff or under his authority could be a subject of discussion or even contestation.

Cardinal Benelli did not dispute the accuracy of this summary. What it amounts to—as Dr de Savanthem goes on to explain at some length, though not in these terms—is an extreme Ultramontanism, the view that imbues the reigning Pope’s prudential decisions with something close to infallibility, and his wishes with a force approaching that of Divine Law.

The prevalence of such attitudes in a Rome is part of the explanation of why things were so difficult for Una Voce in the 1970s and later.  It was a more balanced, one might say a more grown-up, view of the charism of the Papacy which led to the concessions which were made, by Pope Paul VI in the ‘English Indult’ (permission for the Old Mass) of 1971, Pope St John Paul II in the 1984 and 1988 indults, Pope Benedict XVI in the motu proprio of 2007, and indeed with Pope Francis’ concessions to the SSPX more recently. These Popes realised that even the best-intended initiatives don’t always work out well, for everyone, and that even Pope can make mistakes.

The 1984 indult specified that the Mass to be celebrated under its terms was to be in accordance with the liturgical books of 1962, with no mixing of the old and new books. The 1988 indult said that the earlier indult should be applied ‘generously’; at the same time the Priestly Fraternity of St Peter (FSSP) was established with the ancient Mass as its special charism; other ‘traditional’ communities and institutes followed.

One of the strangest things in the book, however, is the attitude of the Pontifical Commission Ecclesia Dei (PCED) in the 1990s, specifically after the retirement of its first President, the Benedictine, Paul, Cardinal Mayer, in 1991. Officials there developed a convoluted argument to the effect that the clause of the 1984 indult which forbade the mixing of old and new books no longer applied, and further claimed that reference to ‘1962’ included all the changes effective in 1965 and 1967, since these were promulgated as Instructions rather than a new ‘typical edition’ of the Missal. This turned out to be part of a programme to bring Catholics attached to the Vetus Ordo into the mainstream, by bringing their Masses into closer and closer conformity with the Reform. Antonio, Cardinal Innocenti, the second President of the PCED, went so far as to tell visiting bishops not to bother implementing the indult since it was a merely transitional arrangement. To his embarrassment, one such bishop (Dermot O’Sullivan of Kerry, Ireland) artlessly repeated this opinion, in writing, to one of the Faithful who had requested permission for a Latin Mass, on Fellici’s authority, and this was passed back to the FIUV (pp289ff).

When Darío, Cardinal Castrillón Hoyos, was appointed as fourth President in 2000, preparations were well under way within the PCED for an Instruction which would have made the 1965 version of the books compulsory for use under the Indult. That would mean, for example, the removal of the Preparatory Prayers at the start of Mass, and the Last Gospel, with options for the use of the vernacular for most of Mass, and for celebration ‘facing the people’. It was only the vociferous protests of the FIUV, under Michael Davies, which put a stop to this extraordinary project (pp362ff).

A final, and rather sad, story from the book is that of the petition to ask Pope St John Paul II to celebrate the ancient Mass himself in St Peter’s, or else to ask a cardinal to do so (pp335ff). This was begun by the Latin Mass Society under the late Christopher Inman. The petition pointed out that since the 1988 Indult the old Mass had not so much as been mentioned in any papal speech or document, except for one occasion on which Pope St John Paul II had addressed a traditional monastic community. Despite the important legal recognition of the 1962 Missal, the whole issue seemed to have been buried.

With the help of the FIUV, the petition became a worldwide one, to be signed by 71 leaders of lay groups and 14 leaders of priestly and religious associations. The LMS went to great trouble to ensure that it be presented in an attractive way, having a beautiful hand-painted, framed panel memorialising the petition prepared, and binding the main document to the highest standards. It was hand-delivered to the Prefect of the Papal Household on 26th October 1998, and the Traditional Catholic world waited for a response.

Despite numerous reminders and requests, only its receipt was ever officially acknowledged: never that it had been passed on to the Pope himself, and never with any kind of reply. This attempt to break through official hostility and indifference was, alas, a complete failure: except, perhaps, sub specie aeternitas. Its request was finally granted, in a rather discreet way, when Darío, Cardinal Castrillón Hoyos, celebrated the Mass of Ages in the curtained-off Blessed Sacrament Chapel of St Peter’s, on the occasion of the FIUV’s General Aseembly, 5th November 2011.

Leo Darroch’s important book contains valuable insights into every major development in the treatment of the Traditional Mass over the long period of time it covers, and makes clear the important role of the FIUV. It will be an indispensable work of reference for scholars and historians, as well as being of interest to anyone who wants to become well informed about the treatment of our liturgical patrimony during its long time in the wilderness.